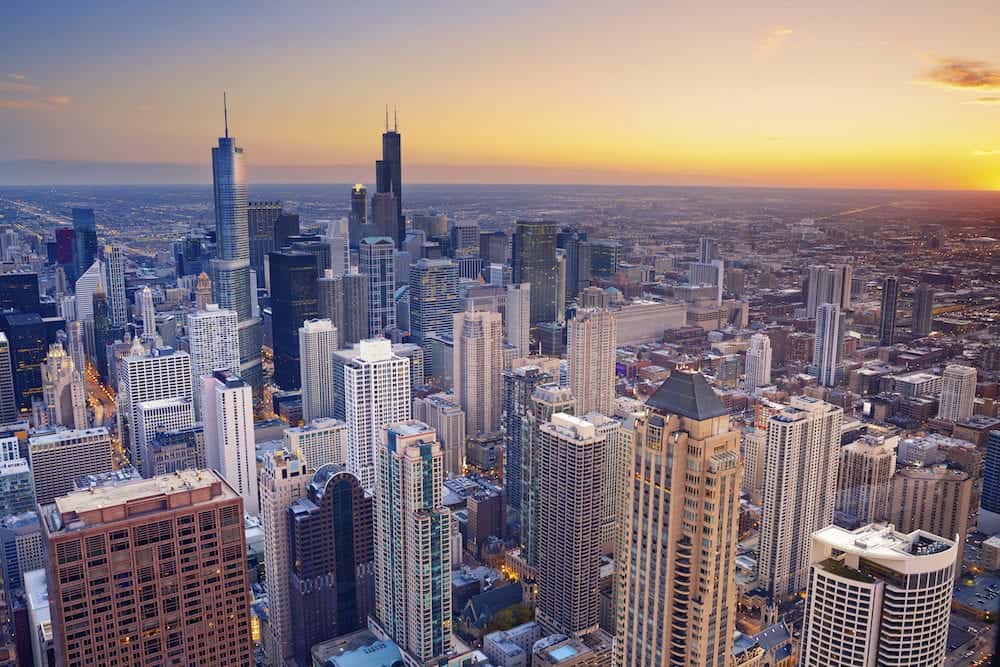 Chicago is the third largest city in the United States, and a major transportation hub for the Midwest region. Chicago is famous for its architecture, deep dish pizza, political corruption, gangster history and cold, windy winters.

The city has an excellent, affordable transportation system with trains serving both O’Hare and Midway airports, making getting around Chicago super easy. In fact, parking is very expensive and difficult to find, so having a car in Chicago is not recommended or necessary.

One of the best things to do in Chicago with kids is to take a cruise on the Chicago River. The most popular is the Architectural Boat tour, which gives an excellent history of the city and the architecture that made Chicago famous. If that is too pricy, or too much time, there are also several water taxis you can take to get from the Loop to Michigan Avenue, Navy Pier or Chinatown. For nearly the same price as a bus ride, you can get a unique glimpse of the city from the water. 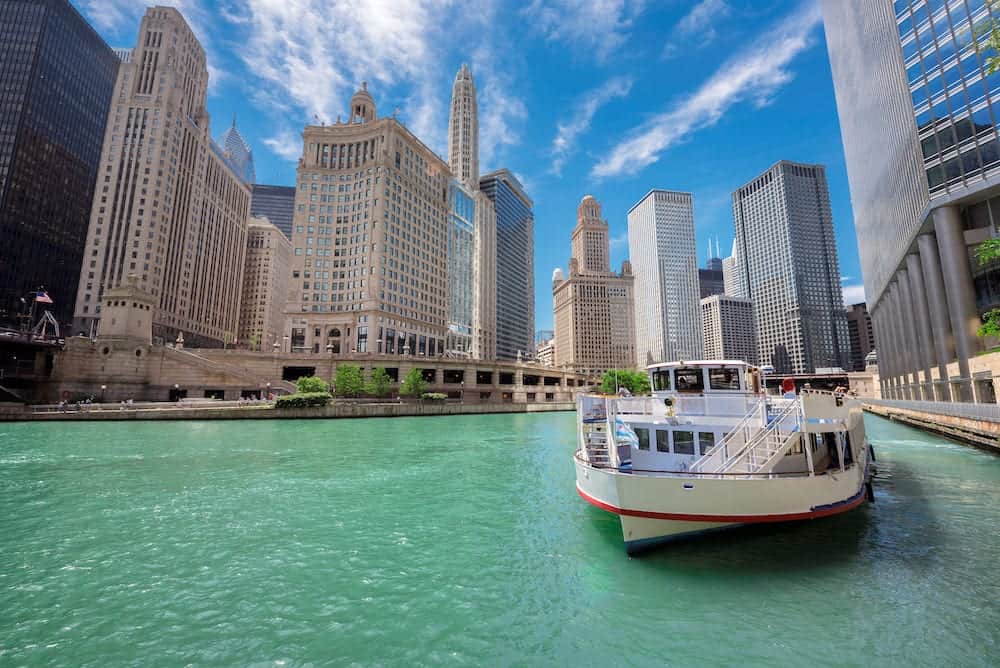 One of Chicago’s newest attractions is the Riverwalk, which is expanded each summer. Believe it or not, the Chicago River only recently became a recreational river. It has a long history as an industrial canal, with horrible pollution and limited river access. Finally, the city has recognized the attraction in having riverside cafes, a walking path, parks, bars and restaurants, as well as a place to park your yacht while you have a stroll. 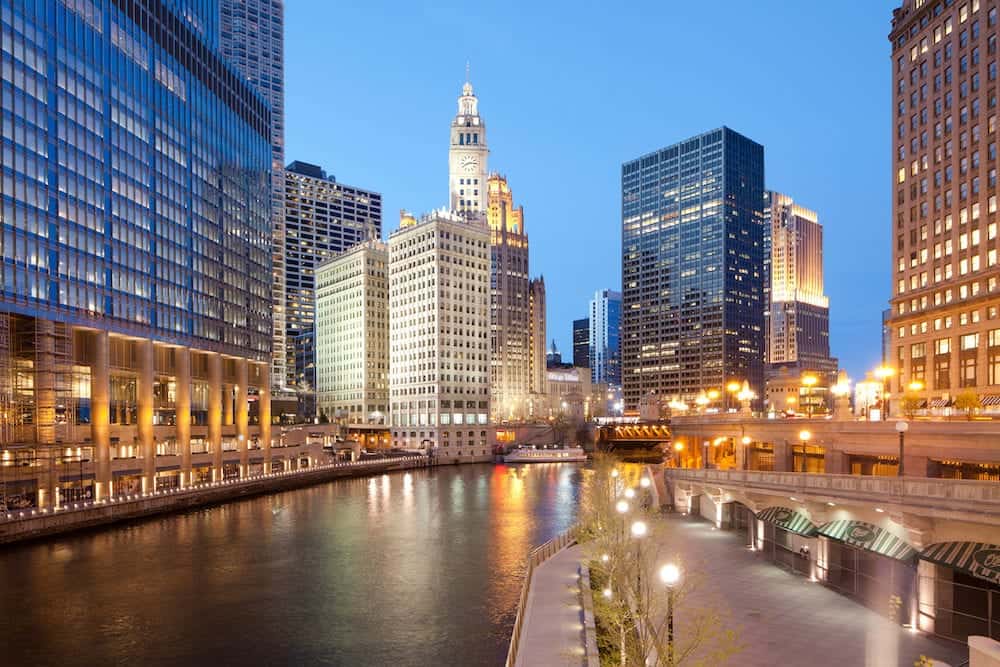 Navy Pier sticks out into Lake Michigan and houses tons of attractions on what was originally built as a dock for freight boats in the early 1900’s. It’s a bit touristy, with chain restaurants like Bubba Gump Shrimp, but there’s a world-class children’s museum and you can’t beat the view from the ferris wheel.

Navy Pier is also where you can catch a boat cruise out on Lake Michigan. You can choose from speedboat rides or classy dinner cruises, as well as the aforementioned water taxis. 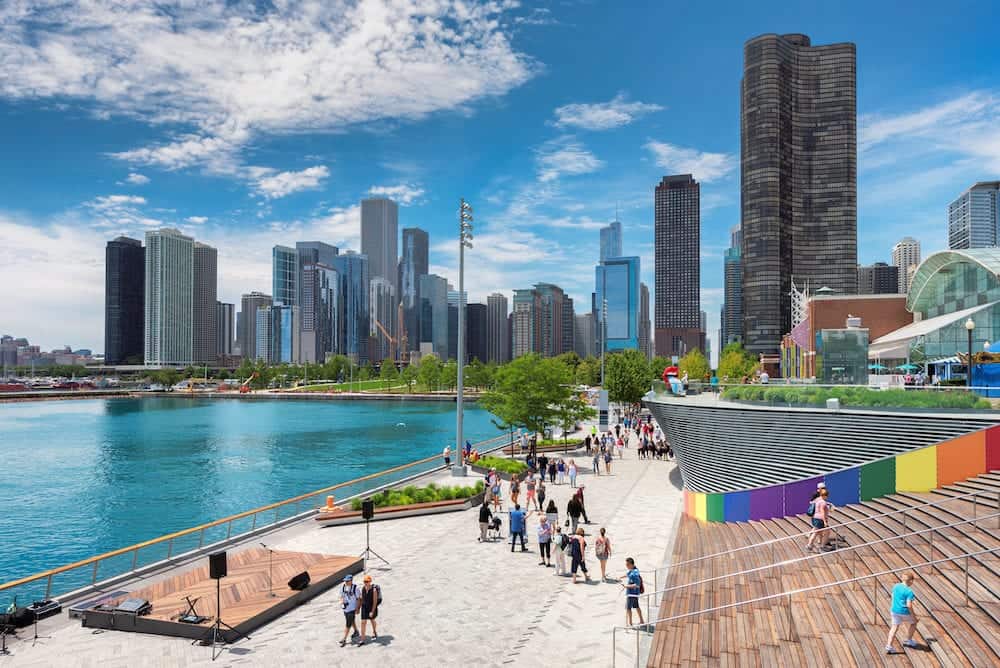 Michigan Avenue, also called the Magnificent Mile, is the jewel of Chicago and has drawn shoppers from all over for years. Anchored at the north end by Water Tower Plaza, stretching all the way to the Chicago River, you can literally shop until you drop on Michigan Avenue.

Classics like Burberry and Saks sit next to trendy stores like Apple, Under Armour and Zara, with plenty of places to sleep and eat mixed right in. If you love to shop, you’ll want to stay on or close to Michigan Avenue. 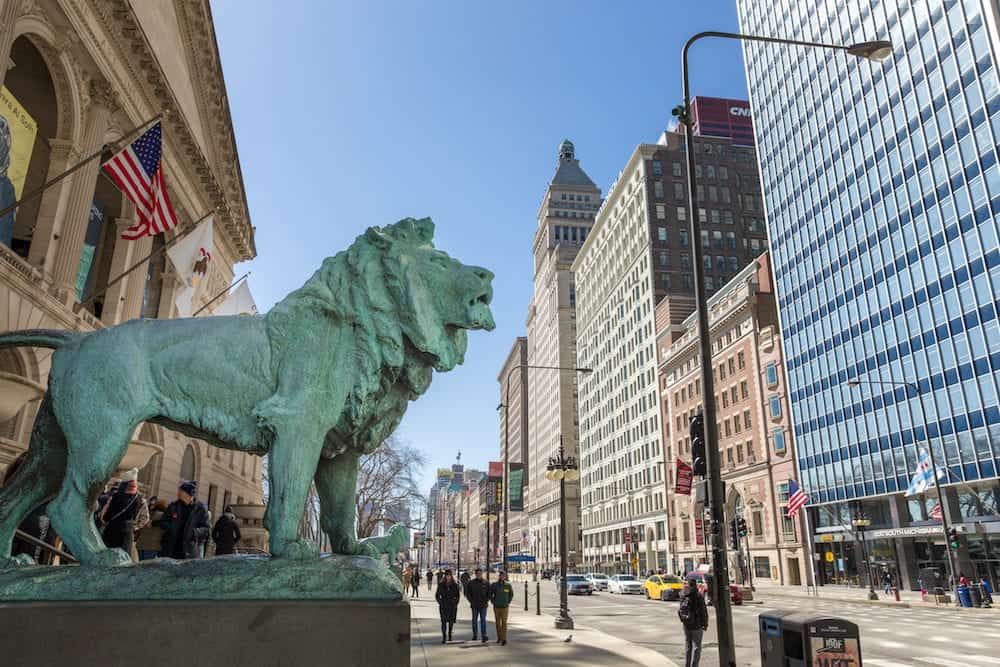 Eataly is a huge Italian marketplace that combines multiple restaurants, food and drink counters, bakery, retail items, a cooking school and a Nutella bar. The Chicago Eataly has been super popular since opening in 2013.

While Eataly is technically a chain with several locations throughout the world, it’s worth a visit when you’re in Chicago, as it’s the largest Eataly in the U.S. and this one is co-owned by Mario Batali. 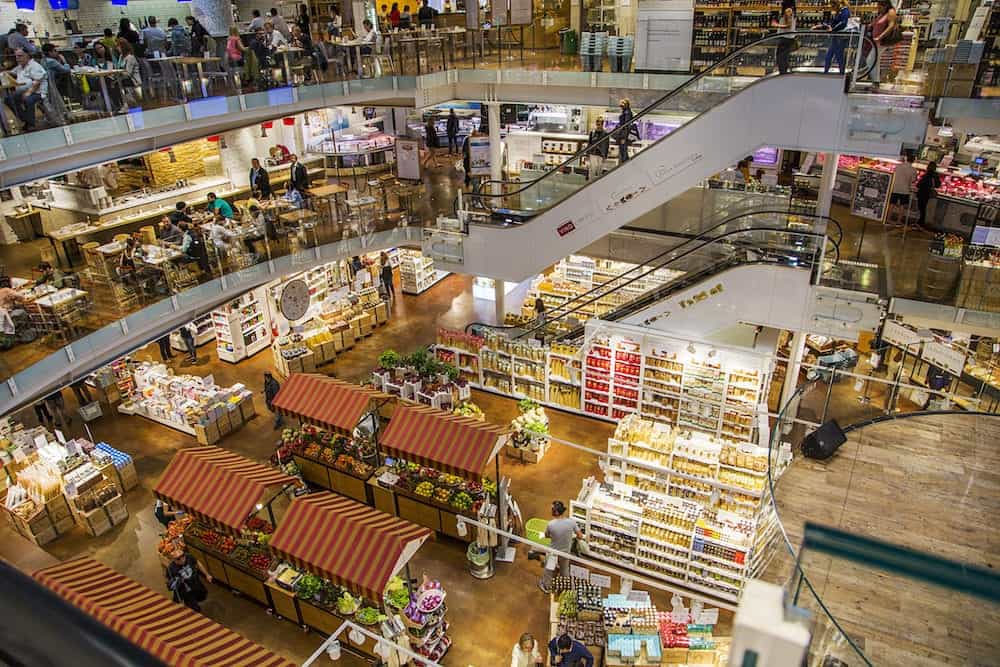 Of course, Chicago is synonymous with deep-dish pizza, so a visit to the Windy City isn’t complete until you’ve tried at least one of the famous pizza pies. Giordano’s, Gino’s East and Pizzeria Uno are all popular, especially with tourists and have locations near the hotel districts to serve visitors.

Expect long wait times for a table, and the pizzas can take up to an hour to cook! Other spots, more popular with locals, are Lou Malnati’s, Pequod’s Pizza and Paisano’s. If you really like pizza, you might want to take a pizza tour and sample them all! 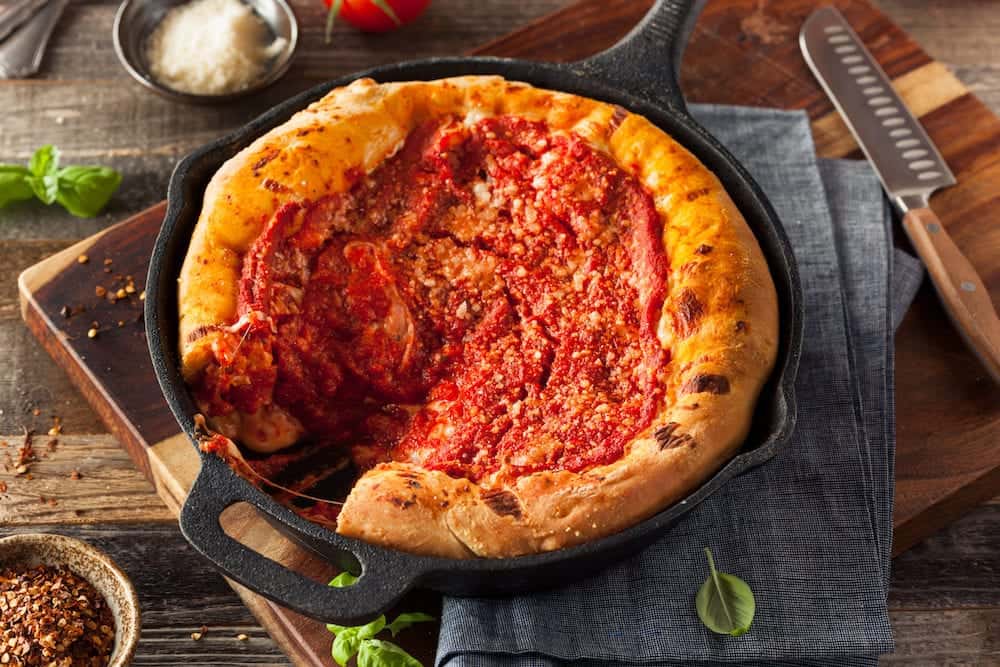 Willis Tower, formerly known as the Sears Tower, was once the tallest building in the world, and put Chicago on the map as a skyscraper city. The 110-story building mostly houses offices and some retail on the lower floors, but visitors to Chicago line up to visit the Skydeck on the 103rd floor.

The latest addition to the Skydeck is the Ledge, glass boxes that extend past the exterior of the building, giving visitors a translucent view in all directions, even 1,353 below them to the street. This attraction is super popular, with lines winding around the block, so plan accordingly or book a dinner to “skip the line”! 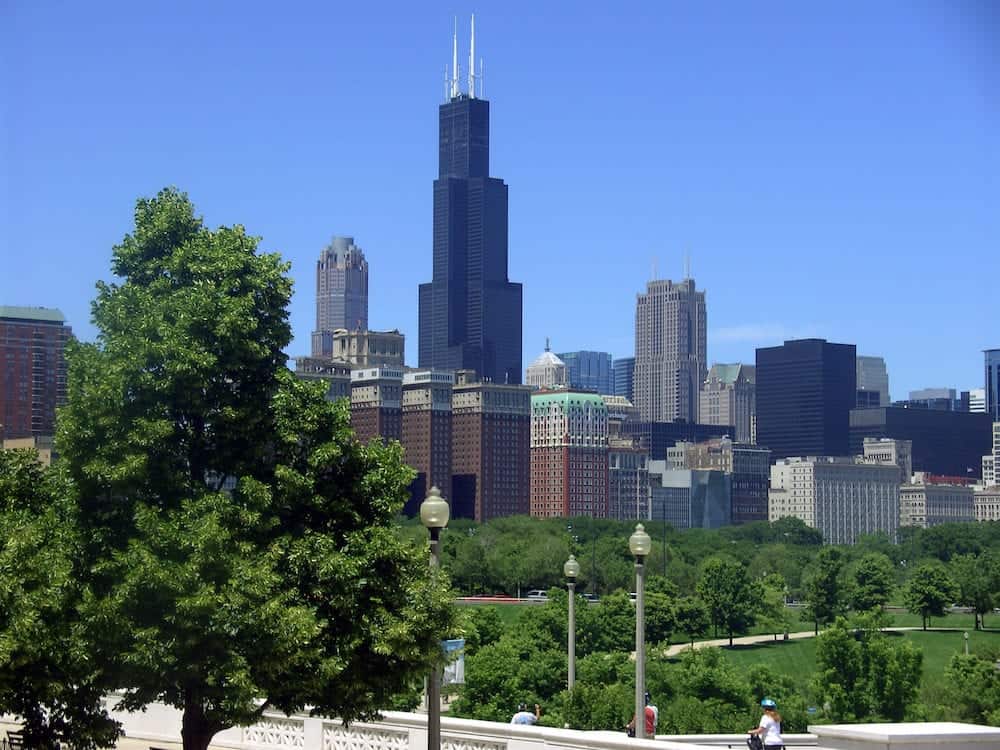 A nice alternative, or compliment to, the Willis Tower Skydeck is the 360 Chicago Observatory deck formally known as the John Hancock Observatory. While slightly shorter at 100 stories, the deck is located at the North end of Michigan Avenue and has a great view of the Lake Michigan coastline.

Not to be outdone by The Ledge, the 360 Chicago Observatory deck has “Tilt” – glass boxes that tilt out 1,000 feet over Michigan Avenue. A local secret for getting the view without the price tag is to visit the Signature Room on the 95th floor for a cocktail. The menu isn’t cheap, but at least you get a drink out of it! 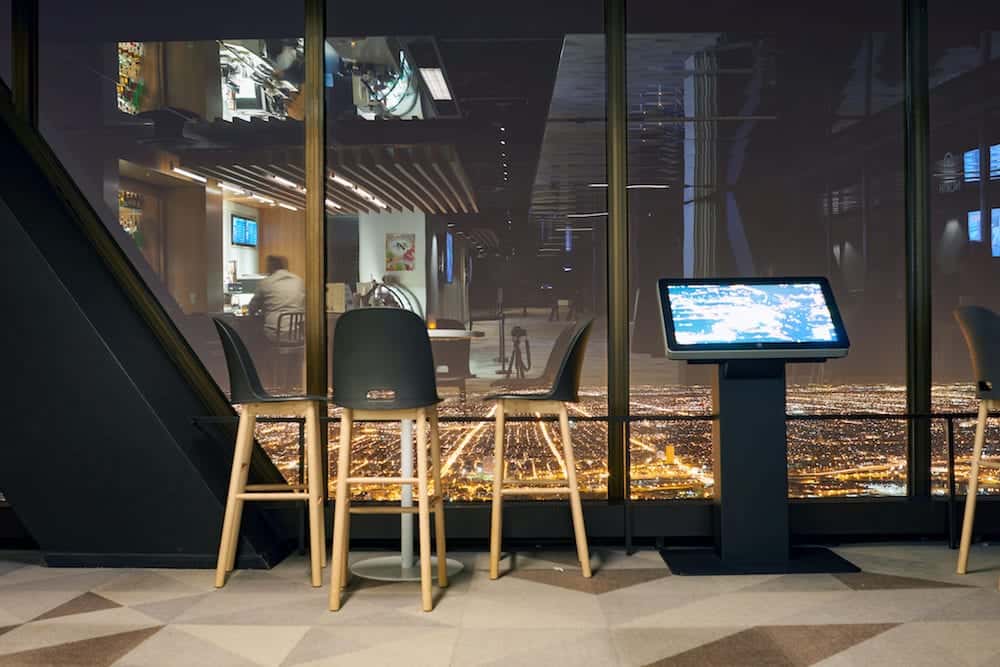 Ever since Chicago hosted the World’s Fair in 1893, it has been home to world-class museums, many of them in buildings built for the World’s Fair. The museum campus extends south along the lakeshore and has the Shedd Aquarium, the Adler Planetarium and the Field Museum.

Elsewhere in the city, there’s also the Art Institute and the Museum of Science & Industry. These are all super popular, and offer free days for Illinois residents, so you may want to plan for those days, or plan around them to avoid the crowds! 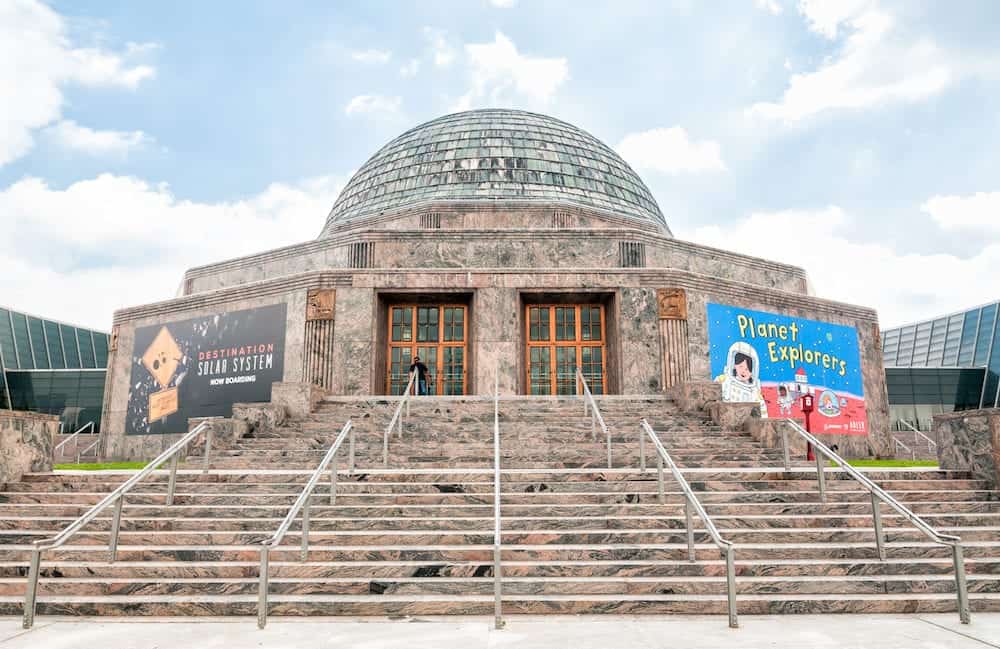 Chicago is a great melting pot city of many cultures, and has many diverse neighborhoods to reflect this. Chinatown is a great destination just south of the city, where you can enjoy delicious dim sum or celebrate Chinese New Year. Greektown is just west of the loop and has great sidewalk dining and festivals in the summer.

Taylor Street is the hub of Italian culture and cuisine, while Pilsen is the place for Mexican food, culture and street art. Chicago also has the largest Polish population outside of Poland, so excellent Polish food is not hard to find! 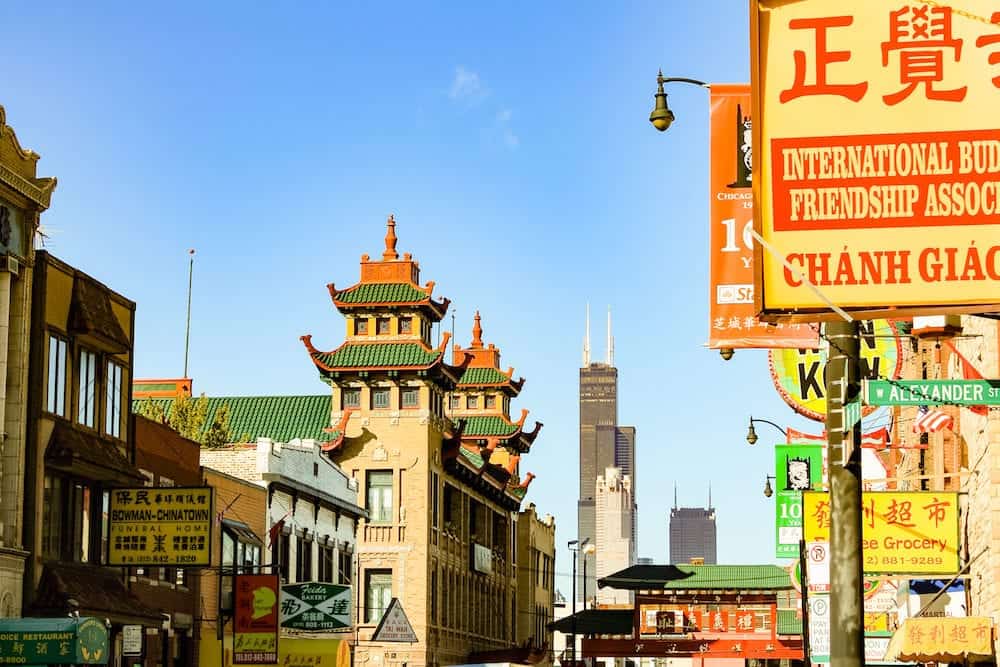 With long, harsh winters, Chicagoans like to get outside as soon as it warms up. If you visit in the summer months, and you should, you’ll likely find a neighborhood festival happening. One of the most popular is the Sheffield Music Festival & Garden Walk, held in the Lincoln Park neighborhood each July.

There are huge festivals such as the Taste of Chicago, Blues Fest, Jazz Fest, etc, but the neighborhood festivals have a much more local feel and are a more budget-friendly way to enjoy a few beers and some live music. 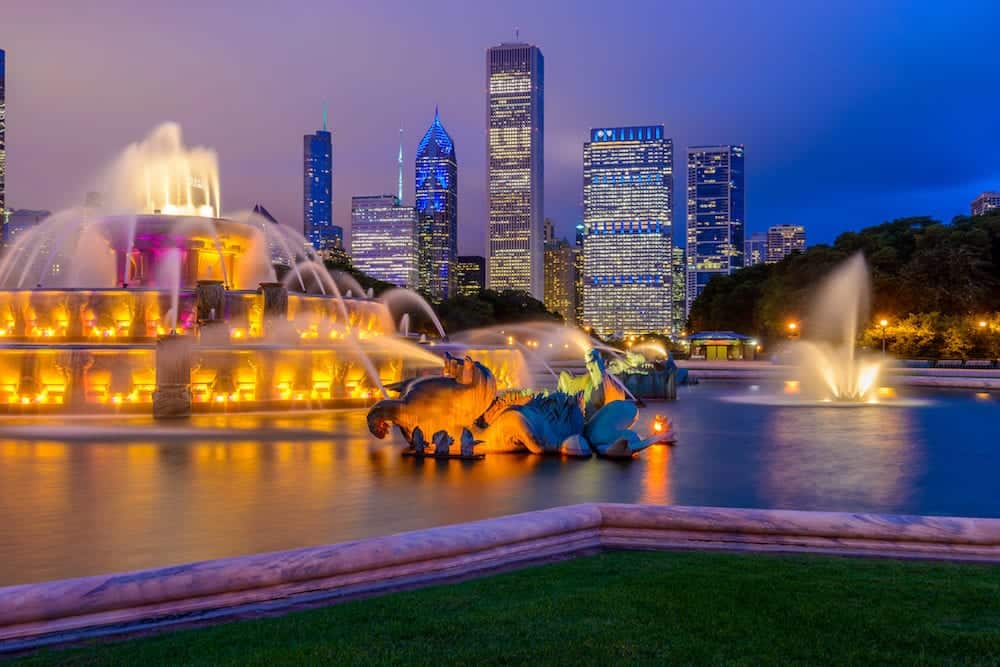 Chicago has a long musical history, especially in the jazz and blues eras. Music fans will want to visit Buddy Guy’s Legends or Kingston Mines for live blues music that goes into the wee hours of the morning. Chicago is also home to some big music festivals, such as Lollapalooza, Pitchfor, and the Windy City Smokeout.

House of Blues always has a great roster of live acts, including a gospel brunch every Sunday. No matter when you visit, you wont’ have to look for for live music in Chicago. 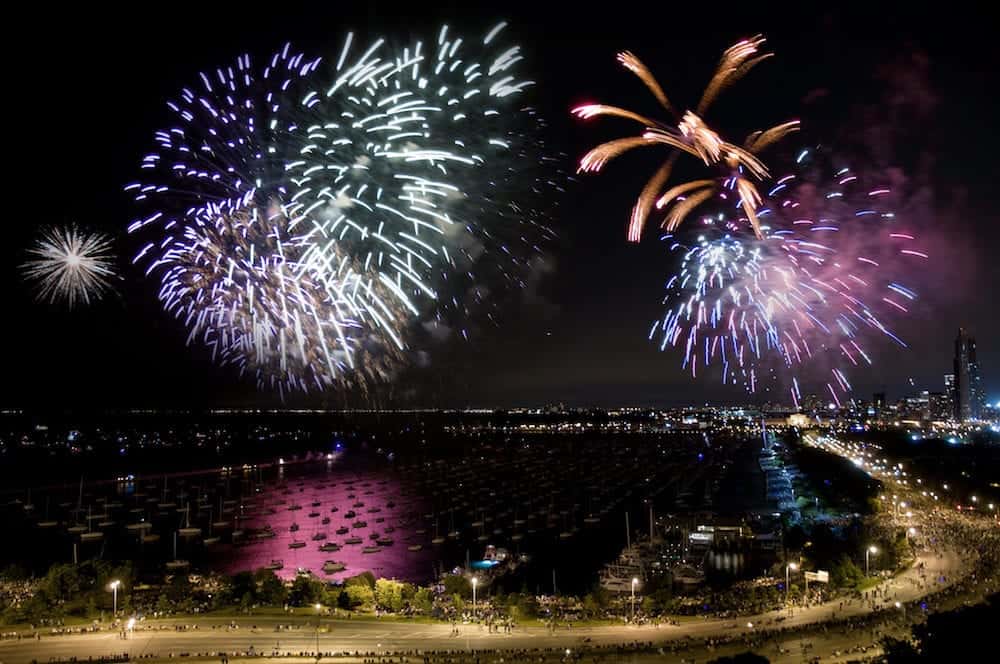 Grant Park has been called Chicago’s front yard, as it rolls out from the loop to the lakeshore and hosts many of Chicago’s summer festivals. Within Grant Park, you’ll find Millennium Park, Maggie Daley children’s park, Buckingham Fountain, the Art Institute of Chicago and the Museum Campus.

Millennium Park is best recognized for “the Bean,” formally called Cloudgate. You can also see live music or movies at Millennium Park, ice skate in the winter and play in the water fountains. Maggie Daley park is the newest addition and features all kinds of cool stuff, plus an ice skating ribbon in the winter. 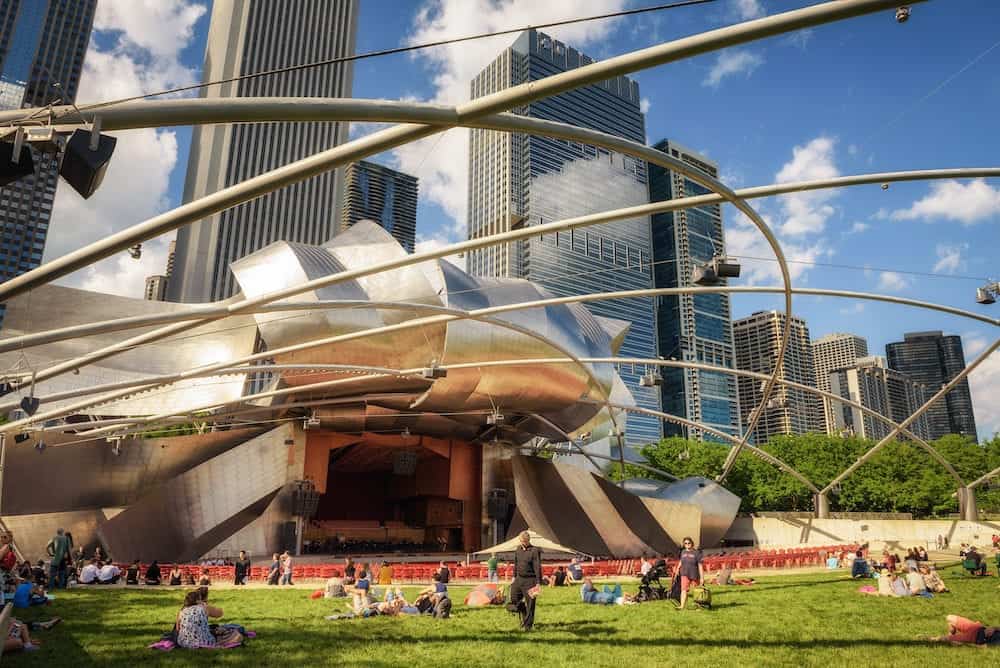 One of the oldest baseball stadiums in the United States, Wrigley Field is a mandatory addition to your Chicago itinerary. The neighborhood around the stadium, Wrigleyville, teems with restaurants and bars. If you are looking for a party atmosphere, Wrigley Field is where you want to go.

If the Chicago Cubs are playing, you’ll get to experience American baseball in a classic stadium. If the Cubs are away, you’re likely to catch a huge concert act such as Pearl Jam, Billie Joel or Lady Gaga. From spring to fall, there’s always something happening at Wrigley Field.

For a more low-key music experience, head north of the city to Ravinia Festival. This outdoor venue has lawn seating that is the perfect spot to bring a picnic and listen to music from big names like Lyle Lovett, Willie Nelson, Diana Ross or Seal. The train line from the city stops right at the entrance gate, and special trains run after the concert so you don’t have to drive.

Stop at the French Market in the Ogilvy Train station to pick up picnic supplies, or reserve a dinner spread at Ravinia ahead of time and enjoy a beautiful night of music under the stars. 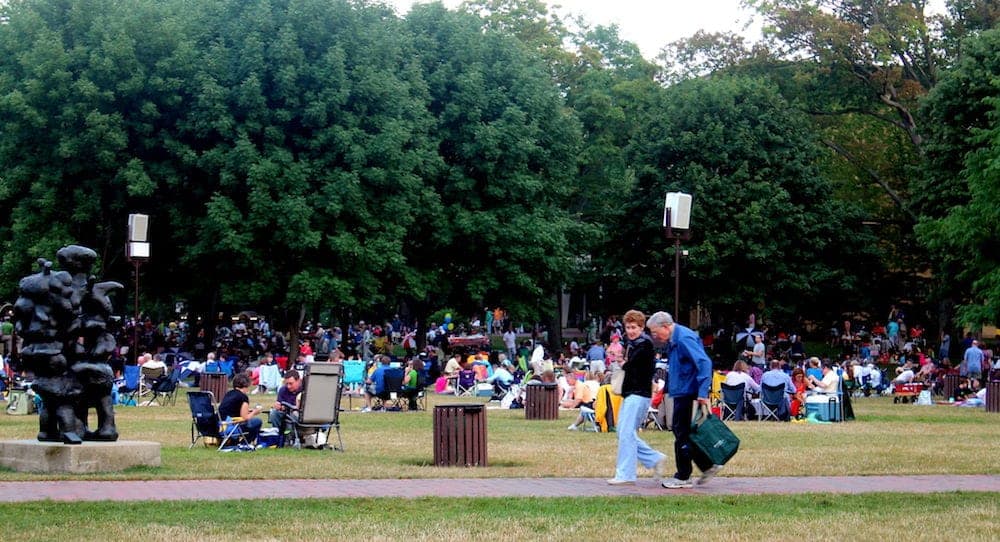 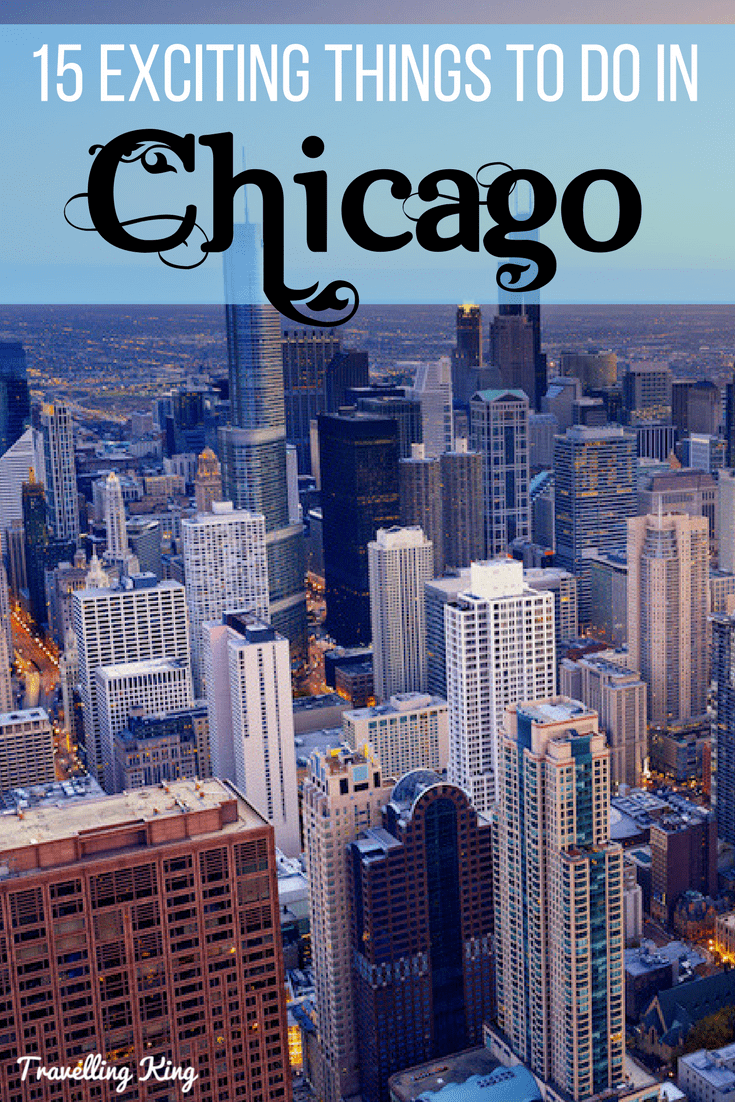 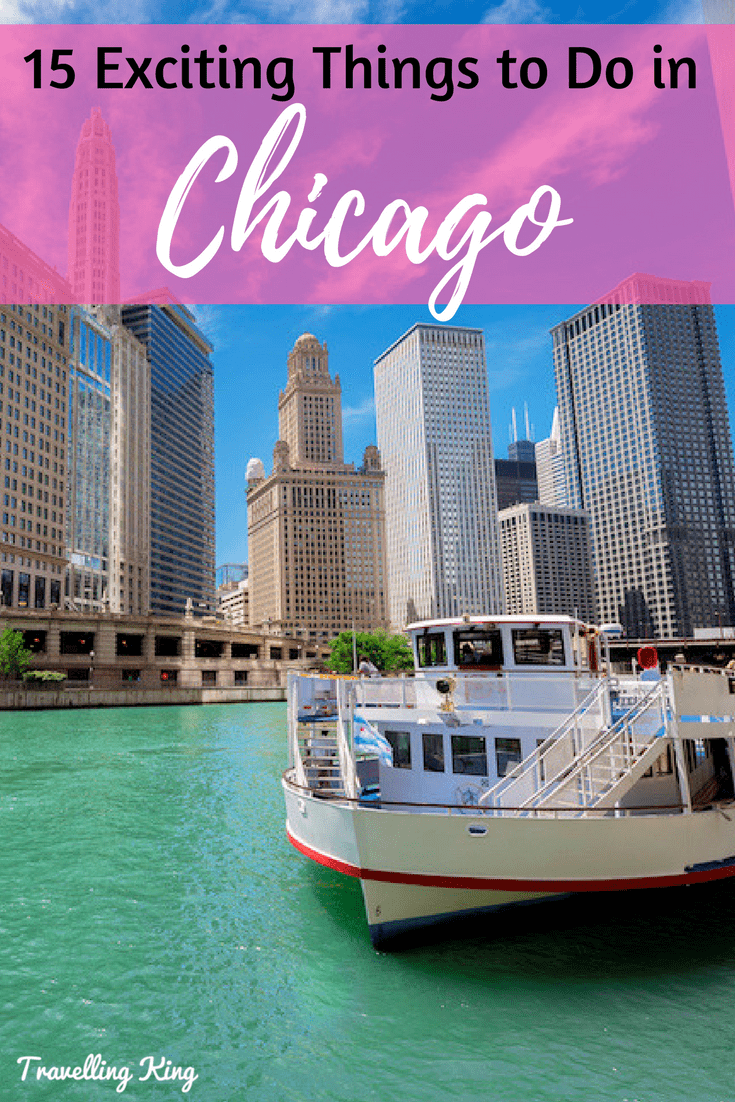 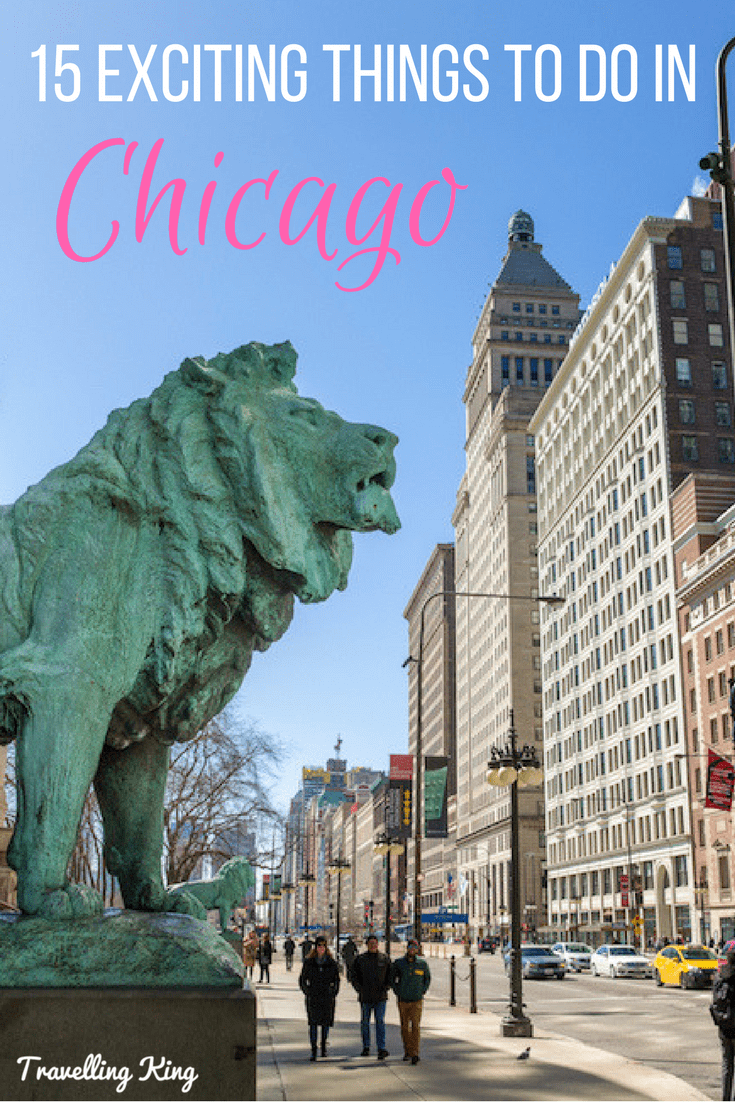