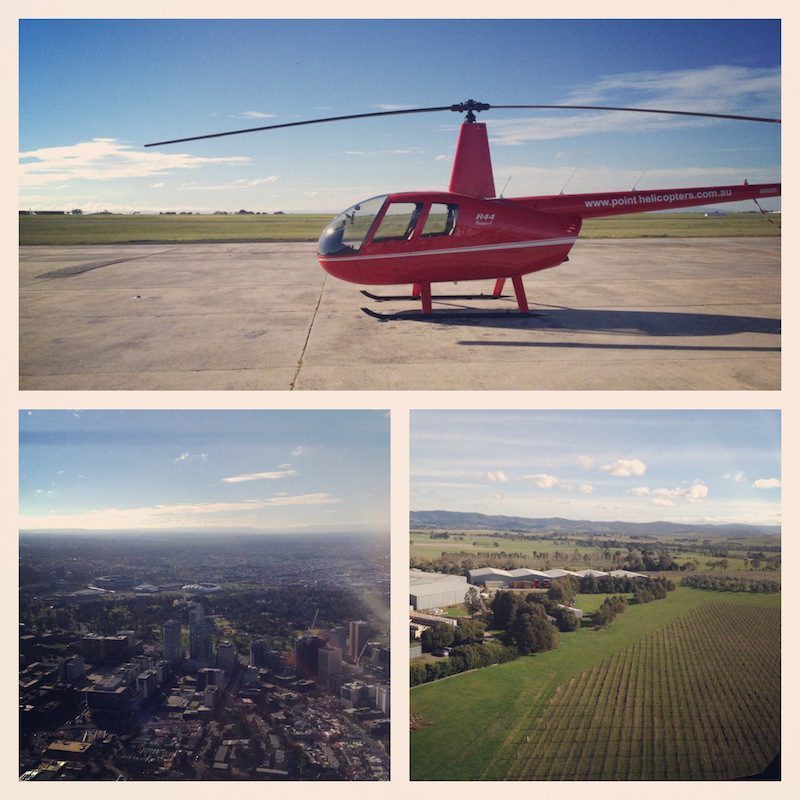 We arrived at the Essendon airport at 10am sharp, my heart was in my throat, my palms were sweaty and I had a screaming voice in my head telling me “you are freaking crazy, turn around and run away now”. We headed into the Point Helicopters lounge and met up with Dean, had a chat and discussed all the safety features of the helicopter like how to walk around the helicopter, what areas of the helicopter to avoid and what to do in the case of an emergency.

All the scary stuff you don’t really want to think about but need to know! For example, most people believe that if a helicopters motor fails then it will fall like a brick to earth, this is untrue, you will, in fact, glide down to earth. This made me feel more at ease. We had to be weighed to ensure there was enough fuel, I tried not to turn too red! (Awkward!). Dean told us that we would be taking a 4 seater helicopter (the pilot plus 3 passengers). 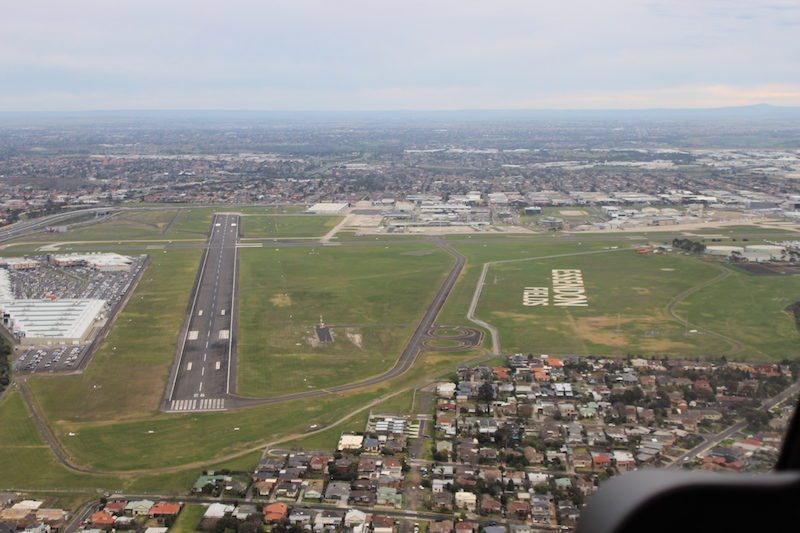 We headed out to meet our trusty steed “the red helicopter”, my nerves were now amplified by 100 and I was thinking “this is it; we are going to get in this little red helicopter and go up really high!” Breathe in and out… in and out…Dean reiterated the safety features of the helicopter, which was reassuring and showed us how to get out in an emergency.  I think I hid my extreme panic very well! We hopping into the helicopter and put on our headphones; it was really cool as we could hear the air traffic control, not that we could really understand what they are saying, it was all random numbers and words, but it was still cool to hear all the stuff you never usually hear at an airport.

Dean did his safety checks (including making sure the fuel was pure) and ensuring we had enough fuel to get us around for the day, then he fired up the engines, I thought they would be so much louder even with the headphones on but they weren’t (we were wearing “fancy pants” noise cancelling headphones), I could clearly hear when Dean or Pete spoke. Dean waited for the “all clear” from air control and off we went. I’m not really sure what I was expecting but the take-off was very smooth and because we weren’t in an aeroplane we didn’t have to taxi down a runway and take off straight, we could go anywhere … within reason. 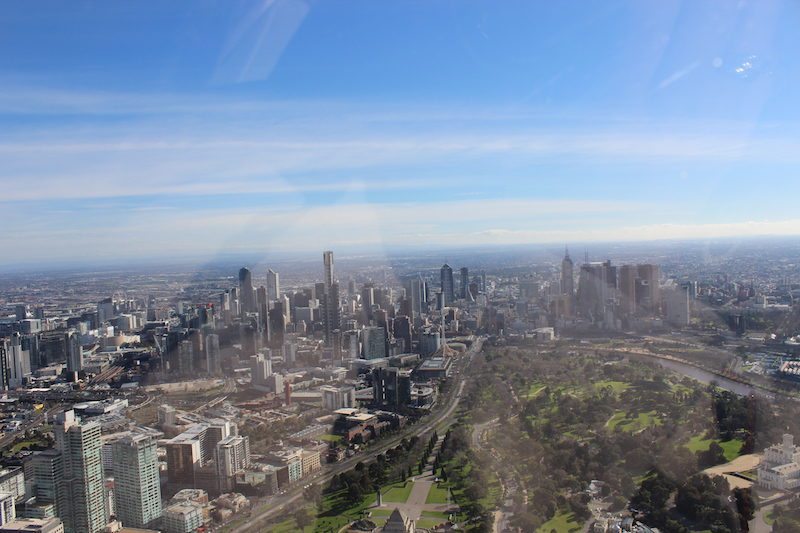 The ground got smaller and smaller as we effortlessly flew up into the sky, we headed straight to the city, flying over Flemington Racecourse, over the Bolte bridge, around the corner past Eureka Tower, over Albert Park (F1 Grand Prix Track), past the arts centre, over the botanical gardens and past the Rod Laver Arena, MCG and AAMI stadium (sports stadiums). After seeing the Melbourne city highlights Dean made a bee-line for the Yarra Valley, flying over Melbourne suburbs and some very picturesque farmlands where the below cows looked like tiny little ants, you could see mountains in the background and the ocean over the other side of city. It’s amazing what you can see from a Helicopter. 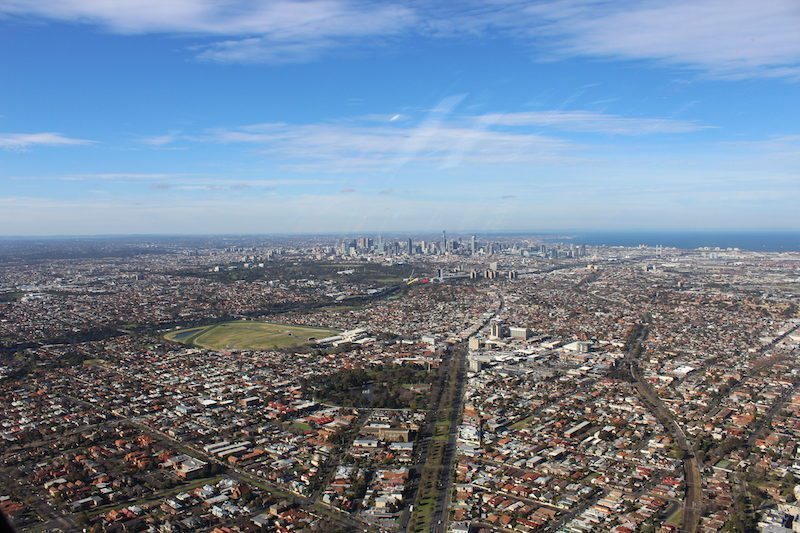 Our first stop was Domaine Chandon where we landed on the lawn between the vineyards and the cellar door, honestly, nothing makes you feel more like a celebrity than arriving at a winery in a helicopter, then jumping out and having a taste of some great sparkling wines (we aren’t allowed to call it champagne in Australia). We took part in their free guided tour which takes you through the wine making process and a short tour around the facilities. We were a little late due to drooling over our helicopter so we only caught the end of the winemaking process. We were then taken to see the actual processing plant (nothing was happening as it was the wrong time of year for wine making) and lead into an underground cellar full of bottles, I would say at least 40,000 bottles in racks along the cellar as well as racks in the walls. 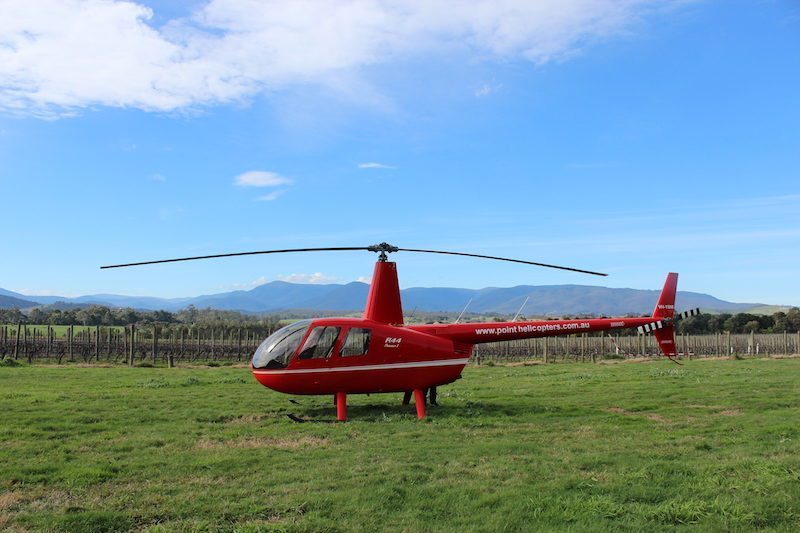 The tour finished at the tasting bar and being a Saturday it was packed with a heap of people and tour groups. We had to wait about 15mins until we were able to squeeze in and start our wine tasting. Chandon (like most wineries these days) require you to pay a $5 tasting fee per person; but if you purchase any wine this fee is discounted off the total bill. Coming from South Australia the home of some of the best wines in the world, it hard not to compare the wines we tasted to the wines we have at home. The conclusion we came to was Chandon, while of course make fantastic sparkling wines, their reds were a little flat. Dean came to check on us now and then to make sure we were okay and also to make sure we knew he was still around, we would have offered for him to join us but he was the designated flyer and I assume drinking and flying is a no-no. 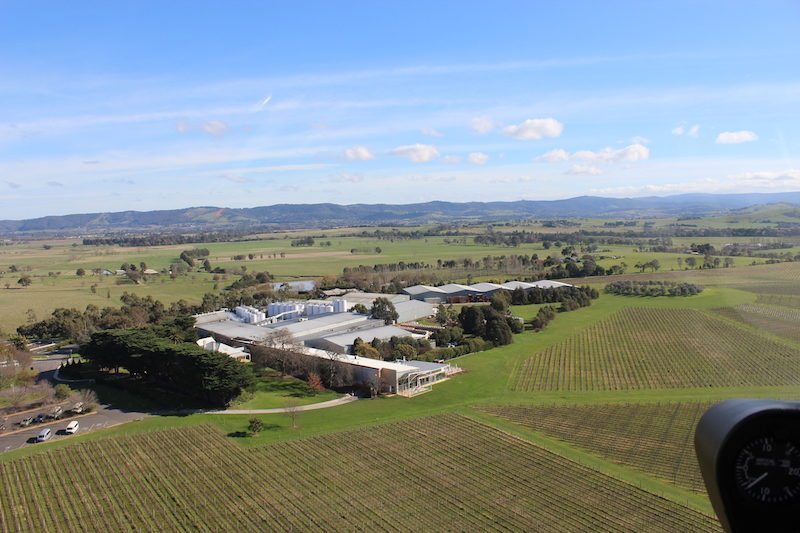 We took a little longer than we should have at of Domaine Chandon and finally wandered back to our trusty steed (the red helicopter) with our arms full of bottles of sparkling we had purchased. Dean stowed these in the compartments under the seats (I’m sure secretly hoping we would forget them and leave them there for him to enjoy later on.. We’re onto you Dean!! – I kid!!). We headed for our second and final stop for the day De Bortoli winery. We arrived at De Bortoli once again landing on the grass near the vineyards and rushed to Locale the restaurant as we had 1pm lunch reservations. We were greeted by the very friendly Maitre D, Tony. He showed us to our seats, gave us our menus and set up an extra seat for us to have a pre-lunch chat to Dean about his experience as a pilot and a little more about Point Helicopters.

The Lunch at Locale was incredible, it will be the meal we compare all others to. We had the Ocean Trout Carpaccio and Beetroot Quince for entrée and the Rolled Lamb Loin and Scotch Fillet for mains. Sadly there wasn’t enough room in our bellies for dessert as we were far too full! Once lunch had finished we headed down to the Cellar Door for some wine tasting. The De Bortoli cellar door isn’t just a winery; it also offers cheese tasting. We were short on time and were still very full so we opted out of the cheese tasting and instead had few wines.

We headed back to our little red Helicopter and back to the city we flew. 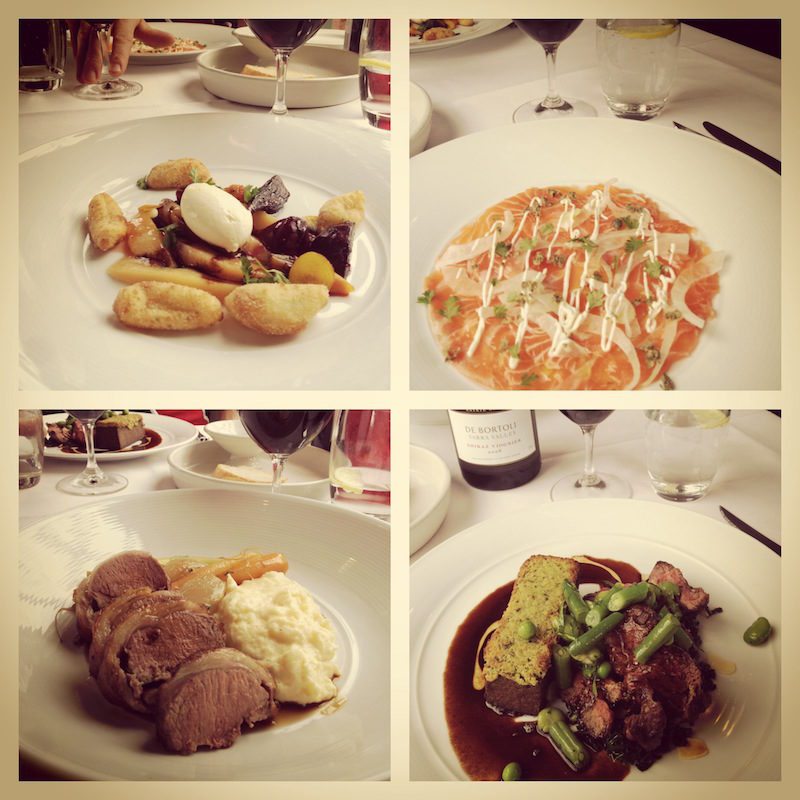 All the way back to Essendon airport, I was thinking about what an incredible experience this had been. We have been in $200K cars and hot air ballooning over the Flinders Ranges, sailing in private yachts and spending our days in private Villas but nothing makes you feel more like a celebrity that a personal helicopter tour over Melbourne and the Yarra Valley.

If I had thought 2 years ago that I would be flying in a helicopter to go wine tasting the in the famous Yarra Valley, I probably would have thought it was a joke!

Point Helicopters provides the best deal out there and to prove it, we did a little research and found that most other helicopter companies in Melbourne either don’t offer a winery tour or don’t offer a second stop off. Winery tours with other Helicopter companies in Melbourne cost between $1199 through to $1500. The same flight with Point Helicopters is $1140 with a stop off at 2 different wineries for 2 people.

Let Dean, Rob and the team at Point Helicopters take care of your every need! They made our experience one we will never forget! 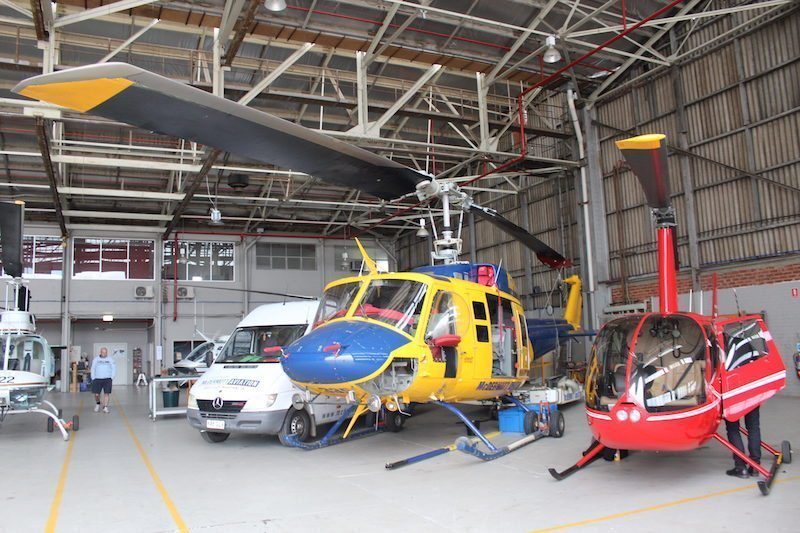 Disclaimer: Point Helicopters provided us with a discount for this tour. All opinions expressed are my own and have not been influenced in any way.