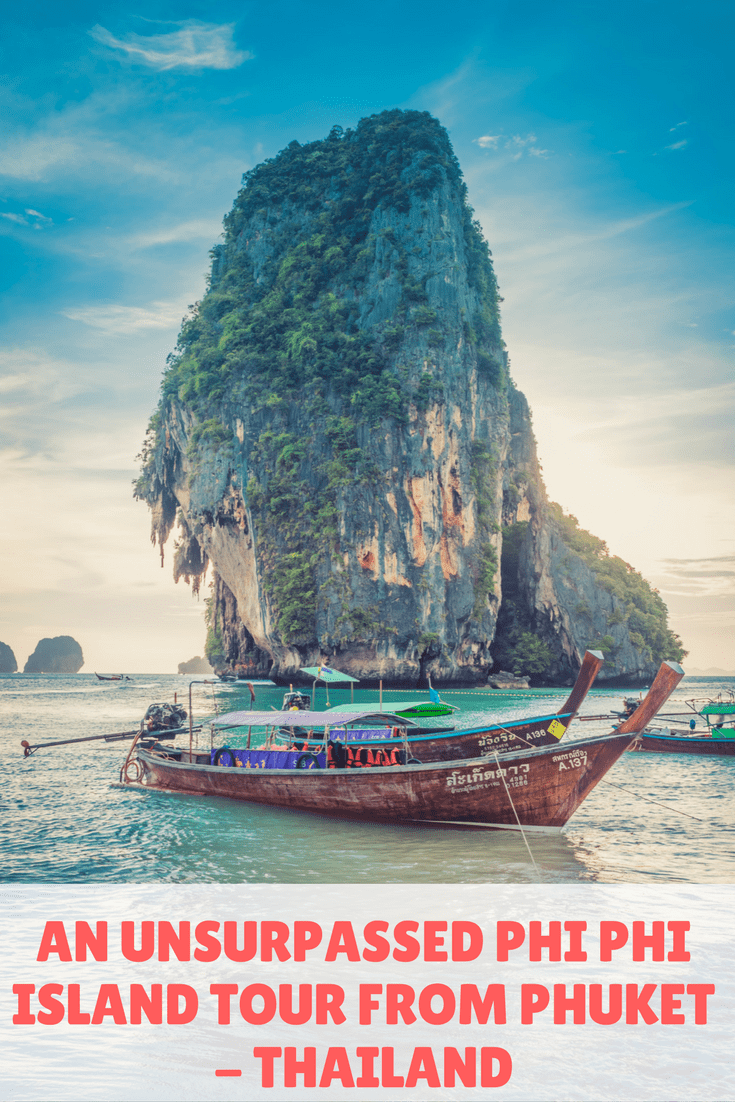 Phuket is an awesome destination to visit as it allows you to take a few quick day trips to near by island like Phi Phi Island, located on the Western Andaman Sea coast. We booked through Viator website on their Phi Phi Island tour  (the reviews we read were fairly good!).  Phi Phi Island was made famous as the beach was used for “The Beach” movie which was filmed at the now very famous Maya Beach.

The speed boat hopped onto had a total of 675 horsepower engines (3 x 225 horsepower engines), so we got over to Phi Phi Island fairly quickly. We were lucky, it was nice a sunny day and the ocean wasn’t too rough. It took about 45-50mins to get to Phi Phi from Phuket (i cant remember the name of the port/jetty we left from)

Plan your trip to Thailand 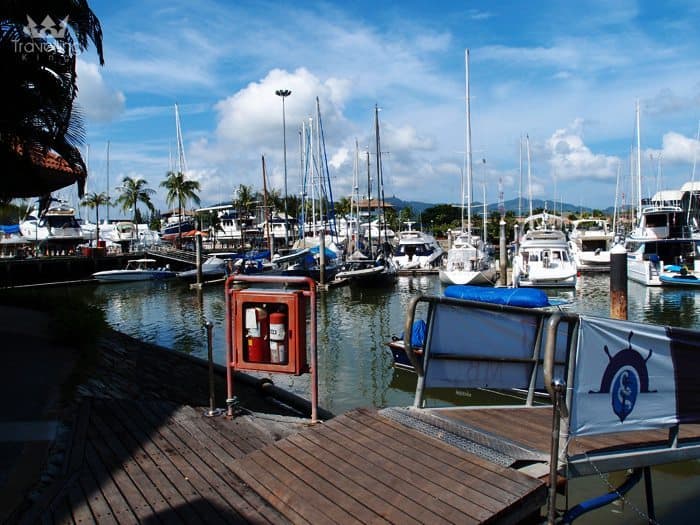 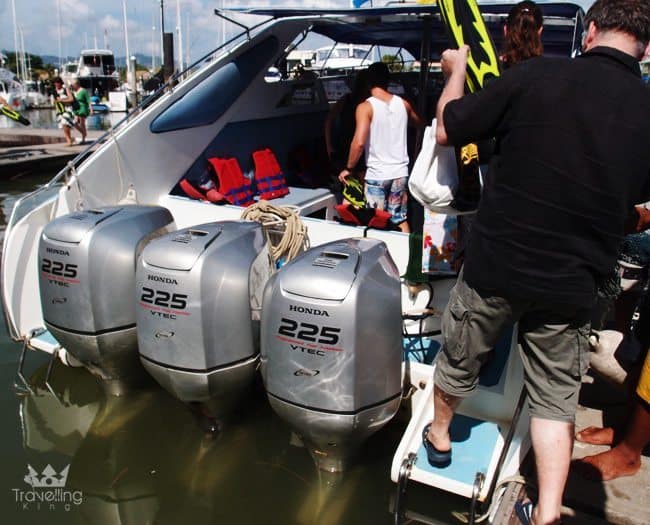 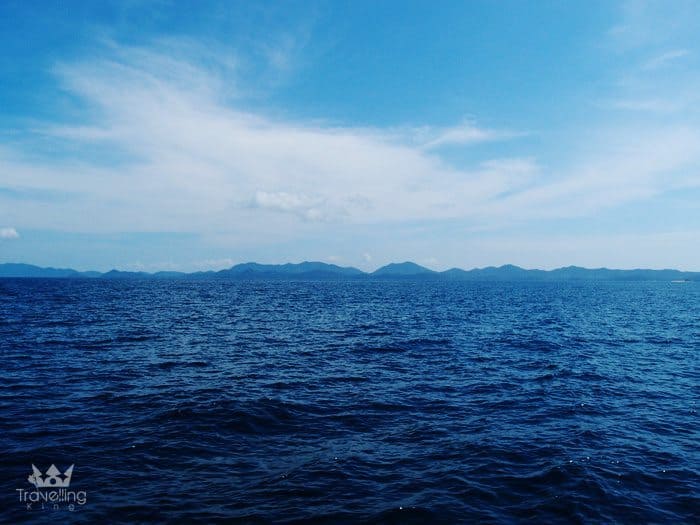 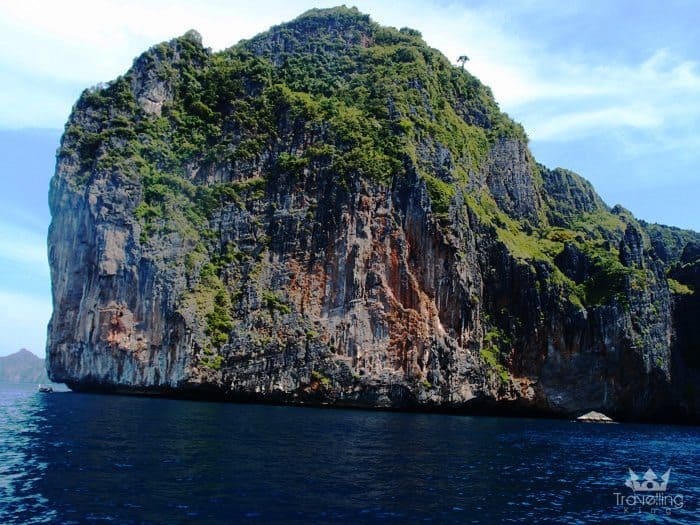 We went past many little islands, some with little homes on them, some looked a little deserted. Makes you wonder how long it would take to build the little homes on such a small island! We went past a few large ships with thousands of shipping containers on them. There were islands as far as the eye could see in the background.

Our first stop on the Phi Phi Island tour was Maya Beach, where the famous movie “The Beach” staring Leonardo DiCaprio was shot. The scenery as we arrivals was just beautiful, huge cliffs covered (mostly) in greenery and crystal clean blue waters.

As you would expect this place was pretty crowded boats and hundreds of people all wanting to see the same thing (in retrospect if we did the tour again, we would try book a tours where you can stop at Maya Beach first last or first depending on the tides, that way you get to enjoy the beach with a small group instead of with a large crowd of people.)  We hopped off the boat and headed in to take in the island scenery. It really is a tropical island, greenery everywhere. Coming from Australia we don’t often see this as it can be very dry and brown, in come areas. 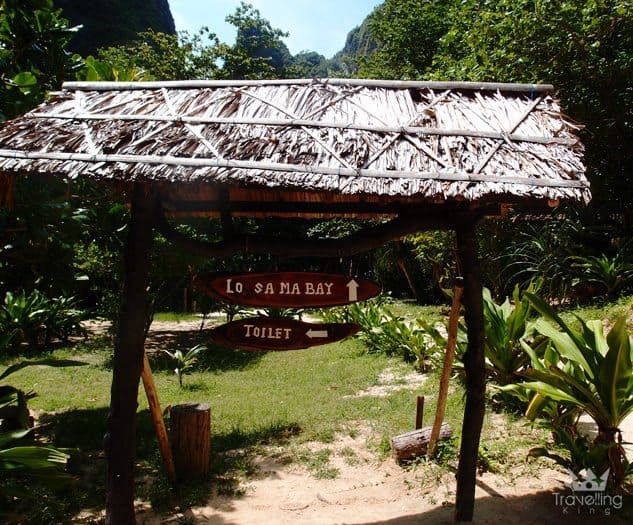 The guide told us not to wander too far as we would not be staying there for too long. We wandered up to the toilet. The trees around the bathroom were mangrove trees and looked so weird, the roots coming out the bottom made them look like they were standing on giant spiders or something.

The male’s toilets are outdoors so ladies don’t accidentally follow your partner or walk into the wrong bathroom..! We had a quick swim and took a few photos of “the beach” It’s a real shame there are so many tourists…but we were tourists as well, so we can’t complain 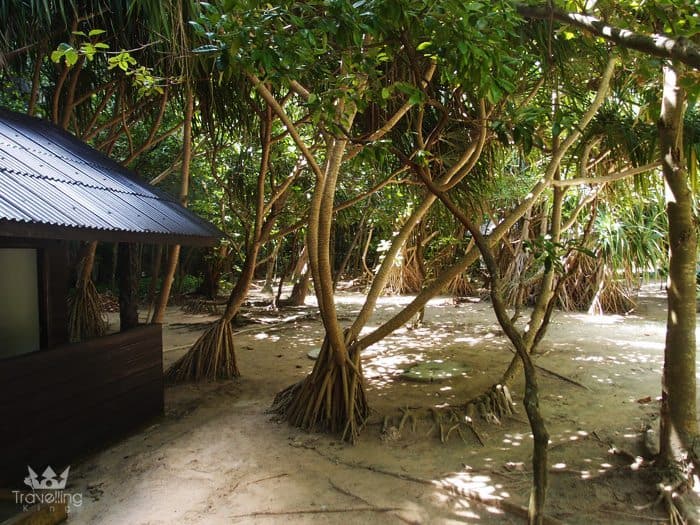 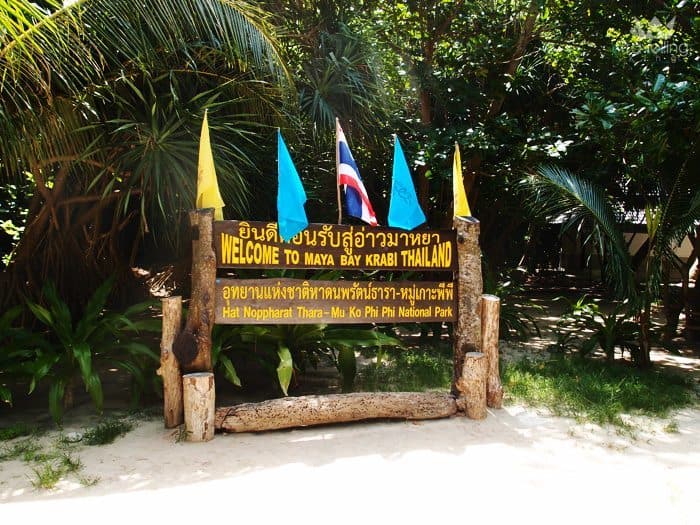 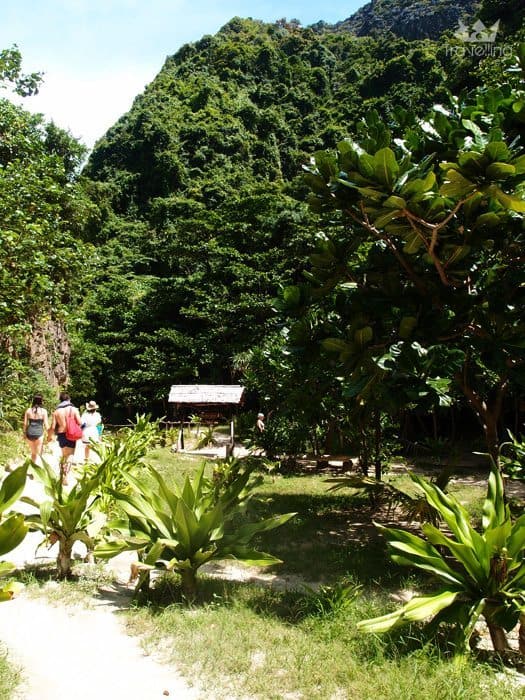 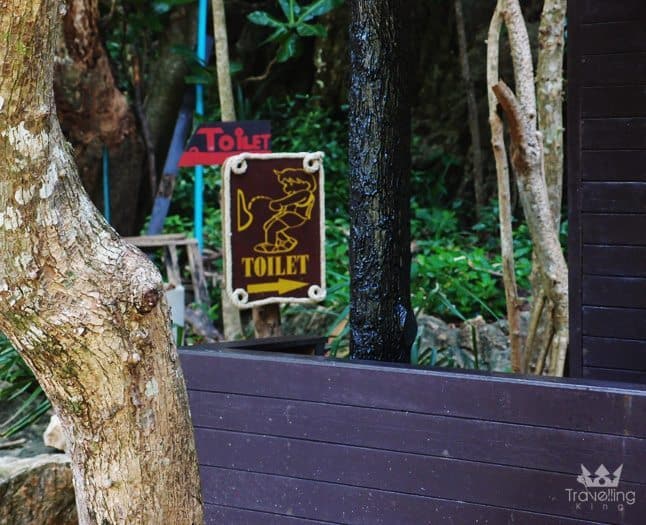 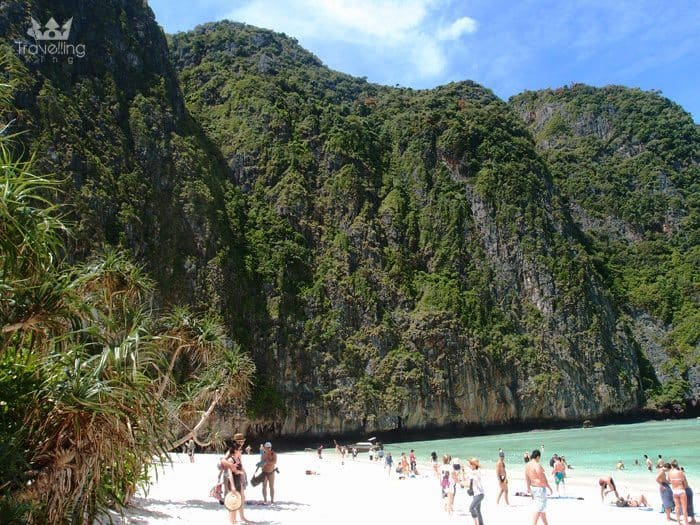 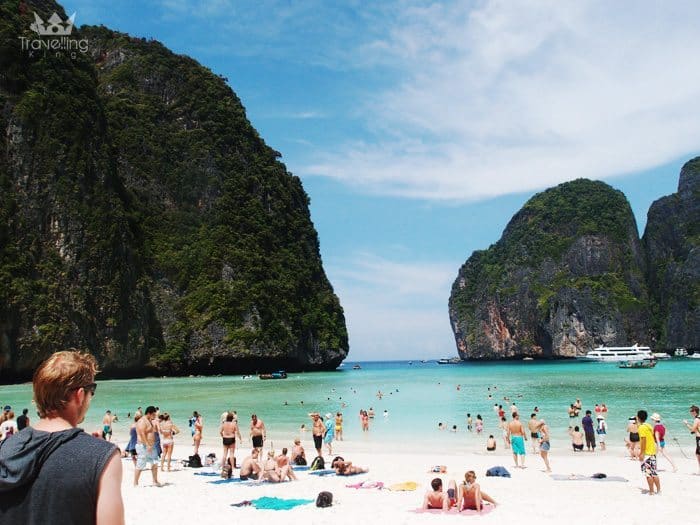 Everywhere we went there would be Tsunami Evacuation Route signs, showing where to go in a Tsunami.  The 2004 Tsunami hit Phi Phi Don and Phi Phi Ley and killed more than a 1000 people. It killed a total of 5395 people in Thailand and a total of 184,167 people in the areas affected by this deadly Tsunami. Very sad but it is good to see there is good preparation and signing everywhere. 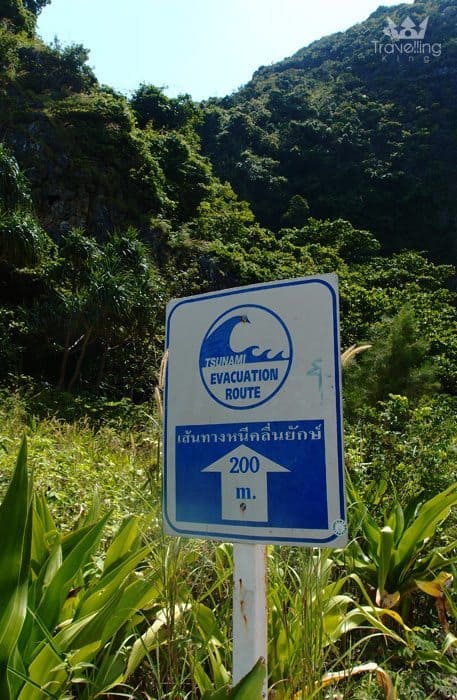 We boarded the boat to our next stop, just around the corner was Pileh Lagoon. This was the bay where Leo (in the movie) dived into the water from a cliff. On the way into the lagoon, it was amazing to look out of the boat and be able to see the coral lying just under the boat. We all took turns jumping off the front of the boat (our “cliff”) into the water. Once again this was slightly spoiled by the masses of people there but that is what you get when you go to a tourist attraction.

It was quite warm and very clear, I always felt like something was going up come up from the bottom and eat me (just my fear of sharks and being eaten live coming up..) We jumped back into the boat after a quick dip and headed to our next destination. A quick note to people, make sure you take off your watches…I bought a nice new watch and forgot I was wearing it, jumped into the water and ruined it.

We stopped off and had a look at “Viking Cave” to observe the swifts’ nests used in making the world-famous bird’s nest soup. While stopped off here we noticed thousands of “fishiesss” (fish…) under the boat, Mr Boy threw in a piece of banana and the fish attacked as if they were piranhas and the banana was a nice chunk of flesh. It was so weird seeing fish eating the bananas, but supposedly they prefer bananas over bread or anything else.

We continued on our way to our next destination, which was Monkey Beach. On the way we saw a huge cliff face that had a face in it, nothing that was carved by humans, just a face that had been naturally carved into the cliff via hundreds of years of erosion! We arrived at Monkey Beach and were told that there were no monkeys on the beach today and instead we would spend longer snorkelling. So we moved onto Nui Bay/Camel Rock to snorkel.

Most of the coral is still entirely ruined from the 2004 Tsunami, but you still get to see nice fish and lots of black spiky sea anemones. There is a cute little beach at Nui Bay, sadly we didn’t get to enjoy it. We spent about 45mins snorkelling then jumped back on the boat to head to Laemtong Beach for lunch. 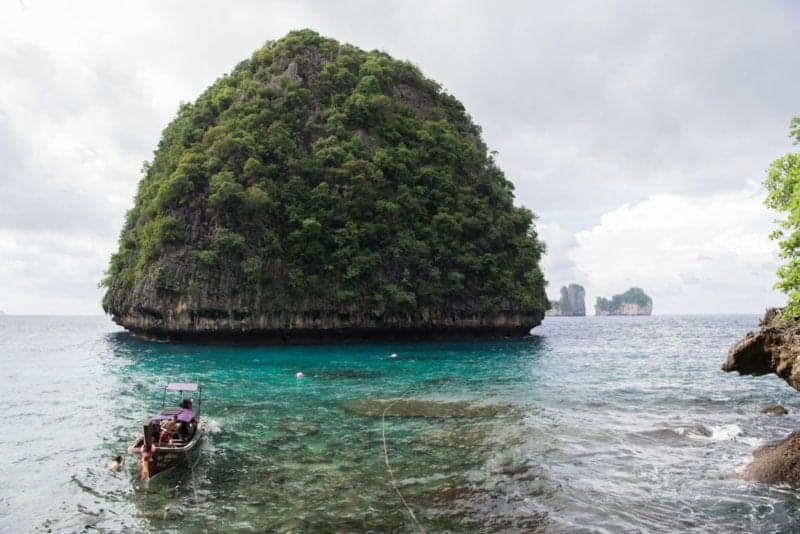 On the way to Laemtong Beach we saw a few areas highly affected by the Tsunami, one area had, had a huge chunk of the island knocked away by the giant wave. (or so the guide told us). It is pretty amazing how powerful the ocean can be.

We arrived at Laemtong Beach, it is a beautiful beach and luckily not too busy! We were all starving and really enjoyed the large buffet provided by the restaurant on the beach. After lunch we sat on the beach and took in the scenery. Once again there are islands as far as the eye can see, it is something I really want to see from the air (one day…).

We watched 2 Thai gentlemen sweeping up the rubbish and seaweed that was washed up on the beach, I felt sorry for them as I would imagine it is a pretty repetitive job and surely once you’re at the end of the beach you have to go back and start again. And unfortunately there are a lot of tourists that leave rubbish scattered on the beach and do not respect the beauty of these locations. 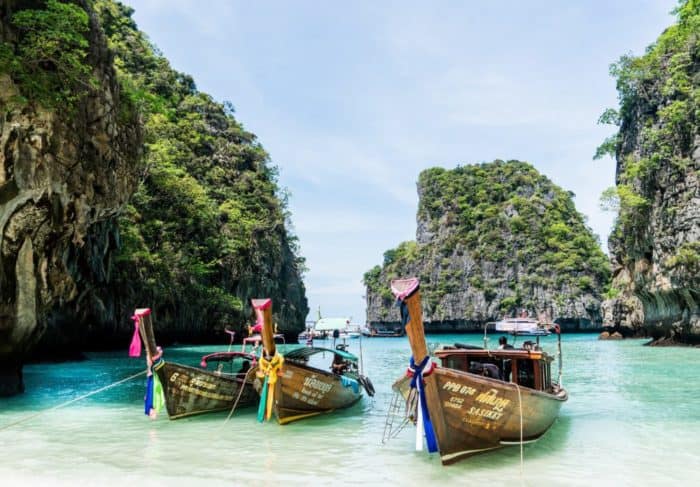 After an hour of eating and relaxing on Laemtong Beach we jumped back onto the boat and headed to Bamboo Island. This was our last stop before heading home and that was probably for the best as the clouds looks angry! Which makes for good photos and a bit of a bumpy ride in the boat. Bamboo Island was a pretty small island with a gorgeous white beach and crystal blue waters. It is so small we were told you could easily walk around it in about 30-40mins.

We opted for to relax and swim. The beach was nice in some areas and in other there was either a lot of broken (and sharp!) coral or rubbish mixed in with the vegetation. Such a pity about the amount of rubbish on the island as it’s really beautiful. In saying that we did see a lot of rubbish floating in the middle of the ocean on the way to and from Phi Phi Island. We snorkelled for a bit, seeing the same types of fish and broken coral as the last place, but it was still nice.

Bamboo island also had signs everywhere in case of a tsunami, it’s good to see that the authorities have taken this so seriously and are making sure to put signs up just in case. We went for a little wander around the corner of the island and noticed a heap of rubbish, what a good way to spoil a beautiful beach. 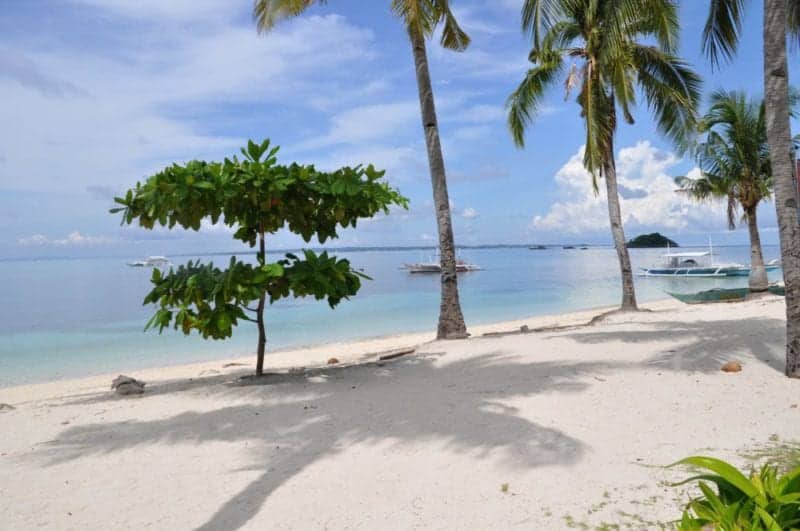 Our tour was coming to an end, we took a quick photo with Mr Boy and jumped back on the boat and back to the pier we went. Everyone was tired and sunburnt so the trip back to the pier was quiet. Of course me being a “photo-holic” I snapped away as we passed islands or snapped away at the sun and clouds. It’s silly but Phuket has some really great cloud formations, they are much fluffier than the ones in Australia…

Once we got back to the pier we sat around for a little while waiting for our van. We sat around with another couple for a while waiting for the van, our hotels were the furthest away so we had to wait a little while for a van to come by to get us, so long we thought they had forgotten about us. While we waiting we had a little look around the pier and noticed it was a boat yard as well with small and HUGE boats dry docked. Our van arrived and we headed back to the hotel, had some dinner and went to bed. It was a very long yet very very enjoyable day!

Have you been to Phi Phi Island? What did you think? 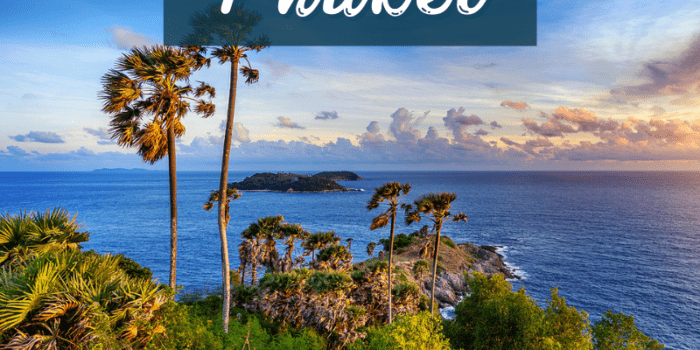 Things To Know Before Going to Phuket 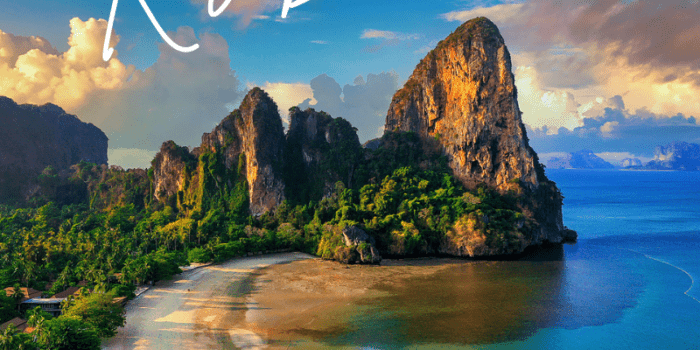 Where to stay in Krabi 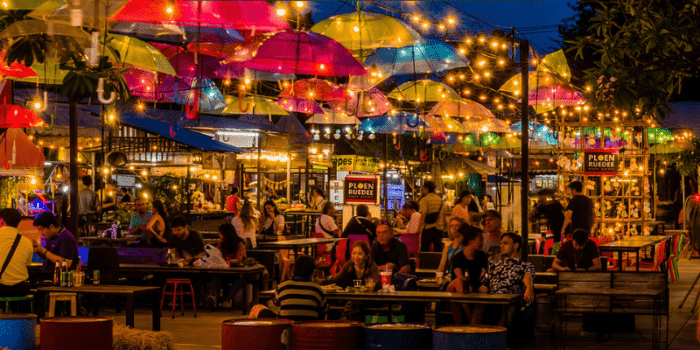 Where to stay in Chiang Mai 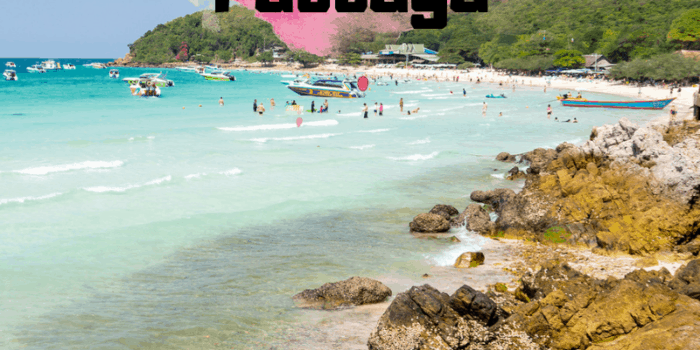 Where to stay in Pattaya 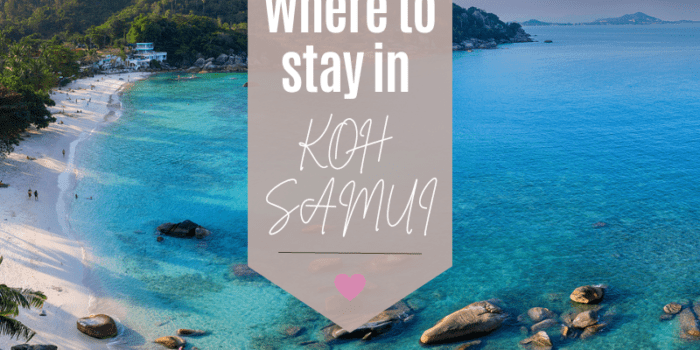 Where to Stay in Koh Samui Thailand