Ballooning has been part of Richards’ life since the 60s when his father was made the first examiner for balloons in the UK. As Richard stated

“This is not to say ballooning hadn’t been going on for a great many years before, but this was the beginning of the resurgence of the ‘modern’ ballooning age”.

Being a balloon pilot is the same as any other pilot in Australia. Pilots are fully trained and qualified through CASA (Civil Aviation Safety Authority ) and just like any other type of flying device, it must be registered and have safety inspections at certain intervals. Since starting his piloting career over 34 years ago Richard has notched up over 2000 hours flying time. In this time he has flown in many countries including Europe, America, Africa and Australia with his favourite ballooning destination being the beautiful Wye Valley on the Welsh border. Richard has been flying in the flinders from 3 seasons while talking about the view Richard explained.

Unsure about travelling during COVID? Check out the COVID travel requirements and restrictions for Australia. 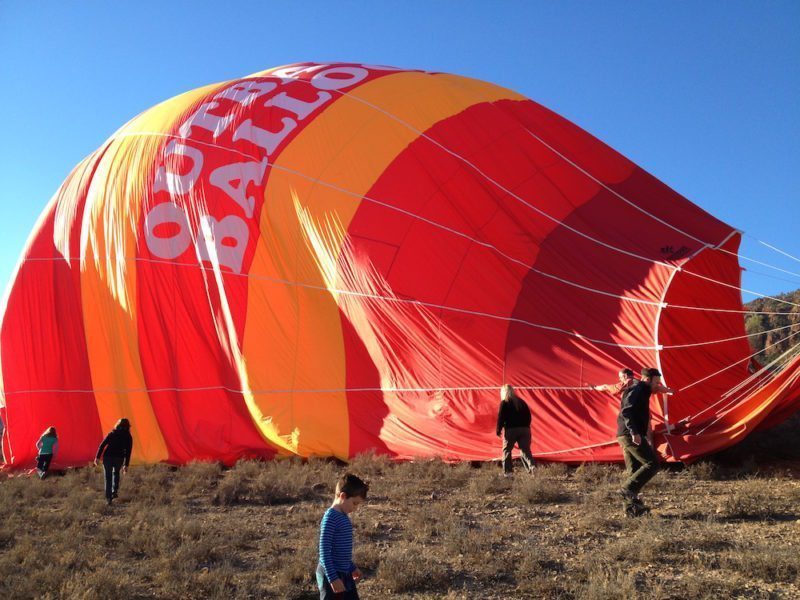 “Whilst one gets used to the splendour of the Flinders; as every balloon flight is different, you see an altered aspect of your area of opps (operation) on each occasion. But, a change of venue is always good for the soul”.

The views from a hot air balloon are nothing less than spectacular, so much better than from a plane. Another passenger in the basket who had been on a scenic flight told us why they preferred the view from the balloon rather than a plane. The balloon travels a lot slower than a plane (so you have time to appreciate all the beauty), the fastest we travelled was 20knots (approx. 37kmh), there was no small perspex window between you and the view and from the basket you have an undisturbed 360degree view of the surrounds. Balloons in the flinders can fly up to a maximum height of 4000Ft (1.2km) above sea level. Above this height they need clearance from the air traffic control based in Melbourne. For Sam, who is deathly afraid of heights, I thought this was going to be a big problem, but Richard was very reassuring about this.

“Being scared of heights, and having vertigo is seldom a problem for people as there is no ‘attachment point’ to the ground on which the eye can focus, and therefore, combined with the height of the basket (edges), you feel remarkably secure”. 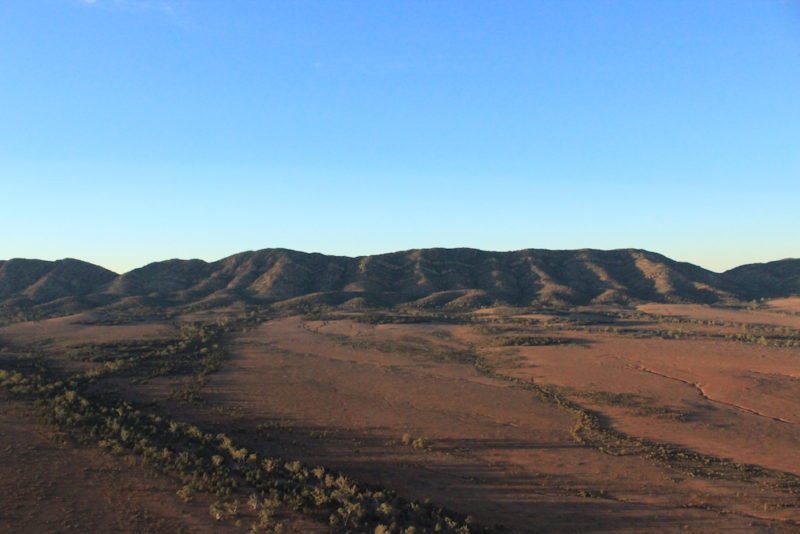 And it is true, standing in the basket you feel like you are standing on solid ground, the basket edges are about chest height (depending how tall you are of course) and I actually found myself leaning on the edge of the basket looking down and not even the slightest bit afraid that I might fall out.

Richard radiates an aura of confidence and professionalism. Before he even considered unpacking the balloon he launched a small helium balloon fitted with a small LED and watched it disappear into the distance so that he could judge the wind speed and direction as it reached different heights. When he was satisfied that the launch would be safe we began helping set up the balloon, he was very informative of what needed to be done and you could see him going through a check list in his mind, doing all the safety checks and procedures.

After the flight when we were safely on the ground we asked Richard about how the Air ballooning industry was affected by incidents such as the one in Egypt.

“Hot air balloon accidents are always very well publicized, but accident statistics for Ballooning make rather uninspiring reading, as there are relatively few incidents per 1000 passengers flown. But, whenever there is an occurrence, there are always; by the very nature of people wanting to record their experience; a large amount of cameras and other recording equipment at hand.

The Egypt accident was caused because the pilot had a messy cockpit. A ‘handling line’ becoming wrapped around a fuel fitting; and, on deployment, when pulled on by the ground crew, caused a sideways force sufficient to break off the fitting. This lead to an uncontrollable fire”.

I spent a while looking up accident stats and Richard is right; they really are pretty boring to read. And there are not a lot of them around. The ones that I did find were mainly from America, where, since 1964 there have been a total of 73 deaths from ballooning accidents. This is equivalent to 1.4 deaths a year. In comparison, in America in 2011 ALONE (last official stats I could find) there were over 32,000 fatalities due to car accidents; this equals over 90 deaths a day. The last fatality in Australia (from ballooning) was 24 years ago, in 1989.

So, getting past off the gloomy stuff, the hot air balloon trip was pretty awesome. As I said while setting up the balloon Richard was very professional, and even though he had a group of armatures helping with the balloon, he went around constantly checking it over and ensuring that everything was done properly. As we unrolled the balloon I could not believe how big it was, it was like a clown pulling a hanky out his sleeve; this balloon just kept coming and coming out of the bag. Richard explained that the balloon we were using help an astonishing 260,000 cubic feet of air, and even though we would be floating because we were lighter than the air around us, the air in the envelope (the technical term for the balloon part is “the envelope”) would still weigh 4.5 tons. We were perplexed by this size of this thing, as it filled up with air it just kept getting bigger and bigger.

“Hot air balloons range from 14,000 ft3 for one person only to 600,000 ft3 capable of lifting 32 people. Balloons can be bigger or smaller than these sizes of course. But these are the smallest and largest production models in the market place”.

It took about 10-15 mins for this monster balloon to fill up (I cannot even imagine how big a 600,000 cubic foot balloon would be or take to fill up). The balloons are initially inflated with a large fan blowing normal temperature air into it, just to expand it. Richard then fired up the burners and WOW, this is not little gas burner from your BBQ or gas heater, It shot out about a 6foot bright blue flame, and looked amazing. Even standing several feet back from it you could feel the warmth and let’s be honest, it was a cold cold morning and the sun wasn’t up yet, so it was a much appreciated source of warmth.  This burner chews up 1-1.5 litres of gas every minute and this balloon had 3 burners (although they were not all firing at once at this stage).

These burners take a very short time to raise the temperature of the air in the balloon to optimum take off temperature.

“Optimum take off temp is between 87-100 degrees Celsius for the air in the balloon, it does of course depend on the ambient temperature of the air outside the balloon though. There is a safety device inside the balloon to ensure that the pilot does not accidentally over heat the air. ‘This is basically two washers soldered together, with a contrasting colour to the envelope, flag attached to the lower one. When the temperature in the envelope rises above the melting point of the solder, which is about 120c , the flag is released falling down out of the mouth of the balloon, and alerting the pilot to the high temperature at the top of the envelope” 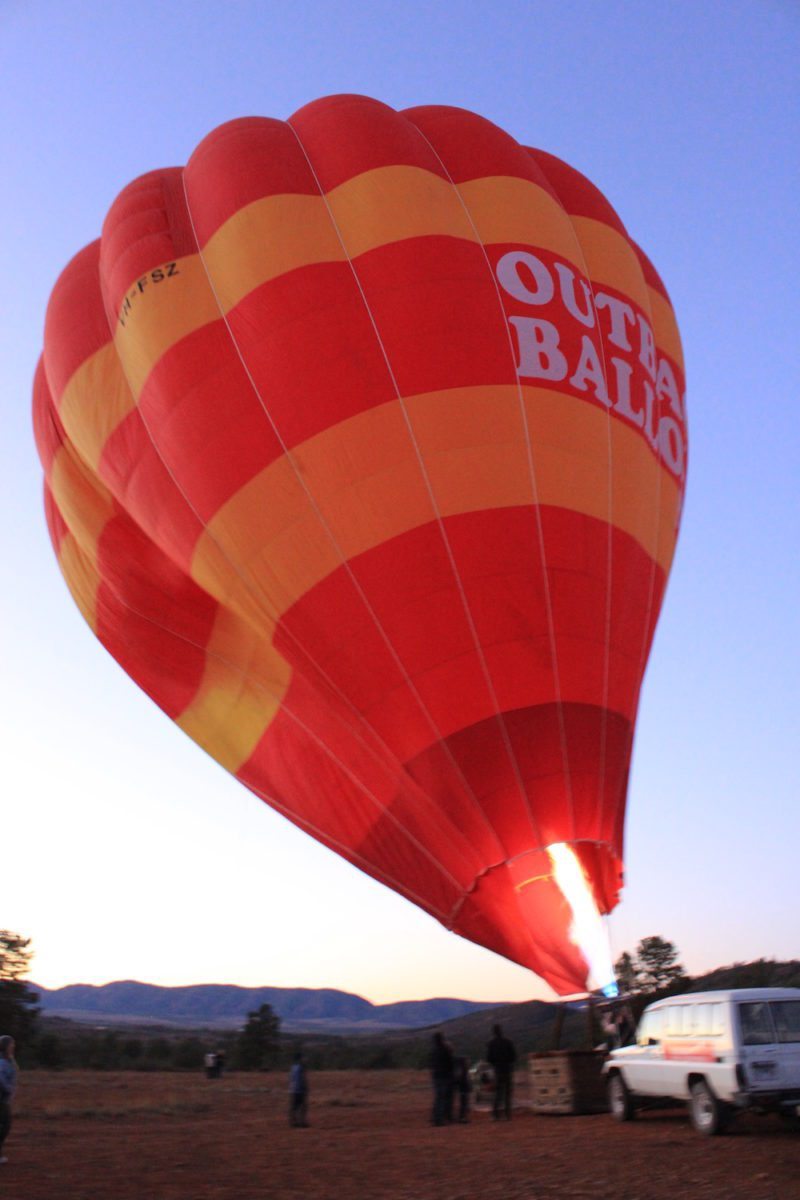 Being a pilot Richard has travelled the world doing astonishing things. Flying film crews over the tree tops in Africa trying to capture the perfect shot and even being a test pilot for the Virgin global flyer project.

“During the race to see who could be first to fly around the world in a balloon, I became involved with the Virgin Global Flyer project. They needed a pilot who could fly a gas (Hydrogen or Helium) balloon to train a couple of the potential co-pilots for the project. This was done, in part, in Nevada. Also there was a need to test fly scale models of the Global Flyer to gain data on various aspects of the properties of helium in the transition of the balloon from daytime flying to the night. As, when helium cools down it contracts, and therefore the balloon will lose height. This means keeping at a fixed altitude to maintain a certain direction would be impossible. To get around this problem, a Rozier type balloon is used. This is a combination of helium and hot air; the hot air being used at night to maintain altitude. So 24hr flights were undertaken to train co-pilots and gather information for flight modelling purposes, with myself as pilot in command. A total of three of these were undertaken, plus other shorter experimental flights of various natures.”

Even after all his amazing experience Richard still hopes that he has not yet achieved his greatest ballooning accomplishment. But he hopes to follow in his fathers footsteps, who completed his last flight as pilot in command at the age of 80.

Thanks to Outback Ballooning, who gave us a discount on this tour. This is a personal blog and our opinions remain our own.

Please note:  Outback Ballooning has finished early for this season (2013). They may return next season

Have you ever been Hot air Ballooning?