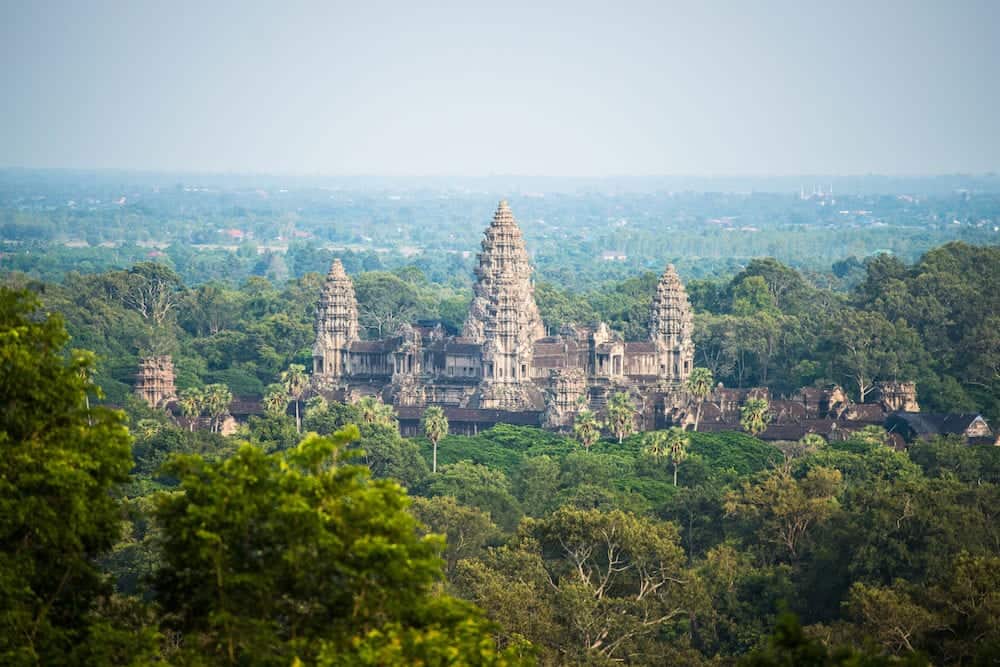 Cambodia is nestled between Thailand and Vietnam, which makes it a frequent stop on most Southeast Asia travel itineraries. Cambodia is best known for the ancient Khmer temples that include Angkor Wat and Angkor Thom. While nearby Thailand is well-known as a beach destination, Cambodia has beaches and islands on the Gulf of Thailand as well.

Cambodia also has a dark history, with a mass genocide of Cambodians occurring under the Khmer Rouge regime in the 1970’s. This relatively recent tragedy has greatly shaped Cambodian culture, but you wouldn’t know it from the Cambodian people you will meet. The main areas for visitors to Cambodia are Siem Reap, the capital city of Phnom Penh and the coastal town of Sihanouk.

Plan your trip to Cambodia

Need data for your trip to Cambodia? We use Tep Wireless which offers unlimited data for $8 per day. Travelling King readers can get 10% off using the discount code TRAVELLINGKING on check out.

Looking for a particular destination, see below otherwise you can go to Cambodia Travel Guide to view current posts

Siem Reap is the most visited area of Cambodia, thanks to its proximity to the Angkor complex. The village is set up to handle mass amounts of tourism, which means you will have many options of deciding where to stay in Siem Reap. Your hotel or guesthouse can also help you hire a driver to tour the temples of Angkor.

For an night out on the town, head to Pub Street. If you’re feeling adventurous, book a food tour and sample some delicacies such as grasshoppers, spiders or tarantulas at the local street fair. 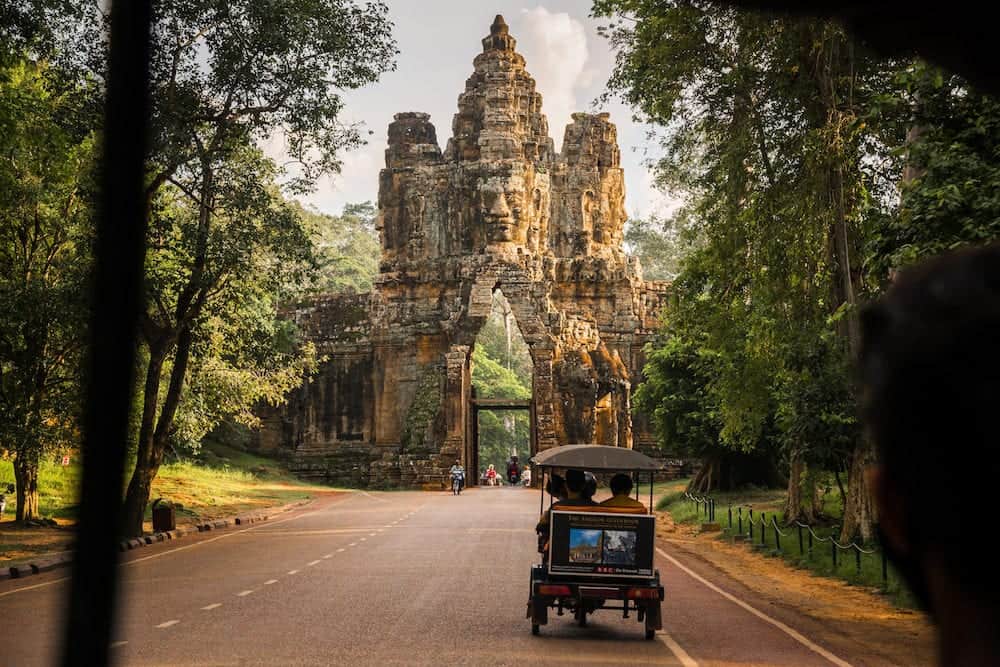 Likely the most photographed of all Angkor temples is Angkor Wat. Catching a sunrise photo in front of the reflecting pool is practically a rite of passage for any visitor to Siem Reap. You can easily spend an hour or more wandering the hallways of Angkor Wat, admiring the carved stonework and looking for signs of the original Hindu temple before Angkor became a Buddhist temple.

If you’ve been visiting other Buddhist temples in Southeast Asia, you will likely spot the difference. These are still active temples, so you it’s possible you will come across Buddhist monks worshiping at various altars throughout the complex. 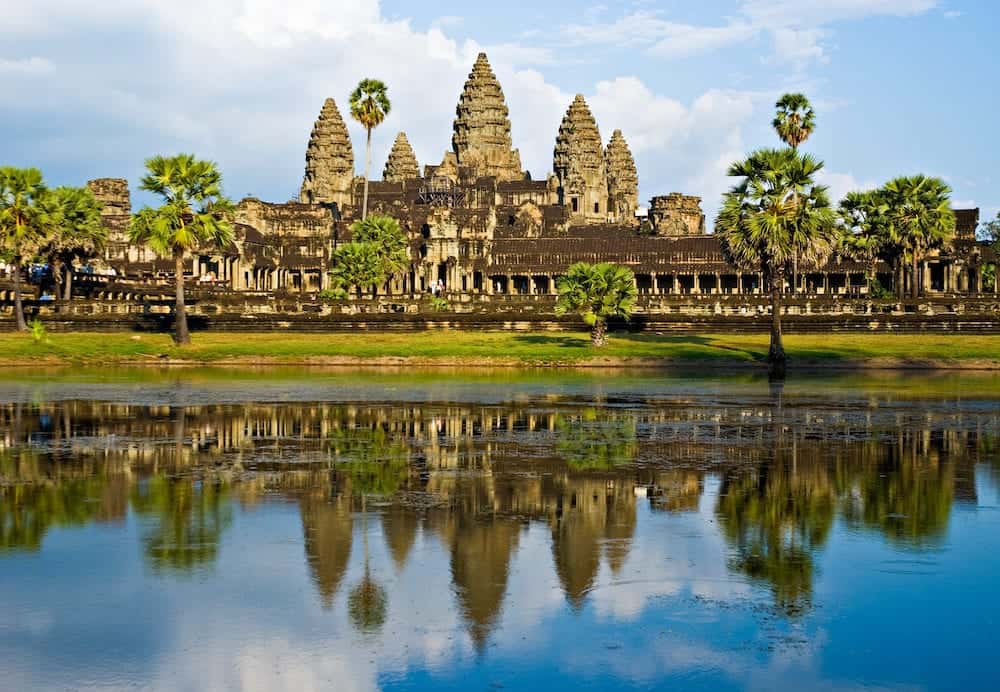 Angkor Thom is a square city, surrounded by stone walls and accessed through five gates, which are part of the reason you will want to visit Angkor Thom. A bicycle tour that takes you along the city walls is a great way to experience this temple. 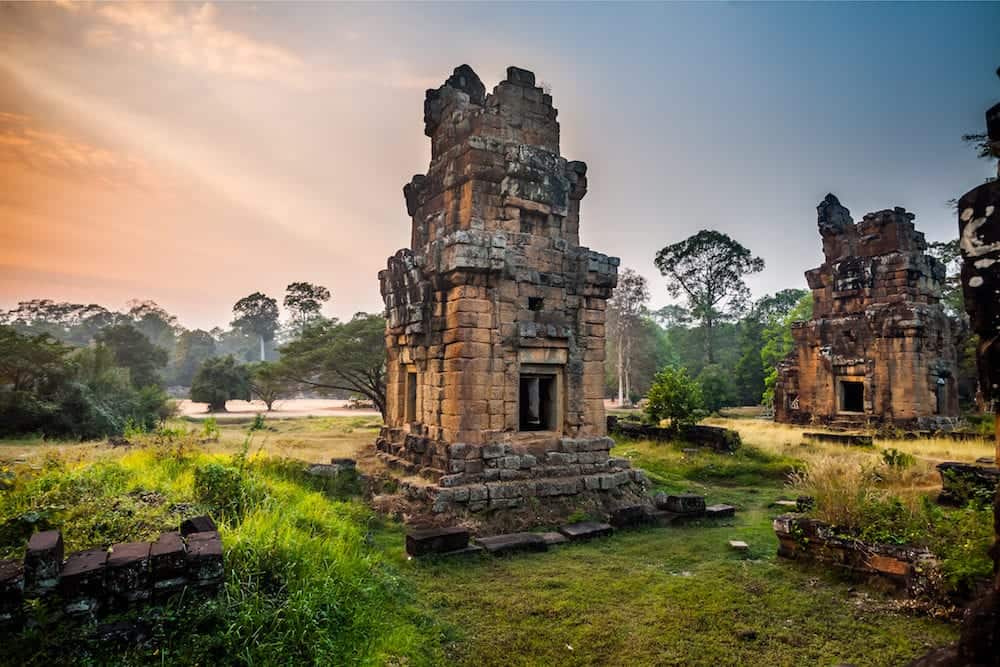 Ta Prohm is best known as the “Lara Croft” temple, as it was the setting for Angelina Jolie’s Tomb Raider movie that released in 2001. Ta Prohm also stands out as the surrounding foliage is growing right into the temple walls.

You’ve undoubtedly seen photos of tree roots that appear to be dripping down the ruins. The roots make for very interesting photo opportunities, and you might even spot some ancient faces peeking out at you from behind the trees. 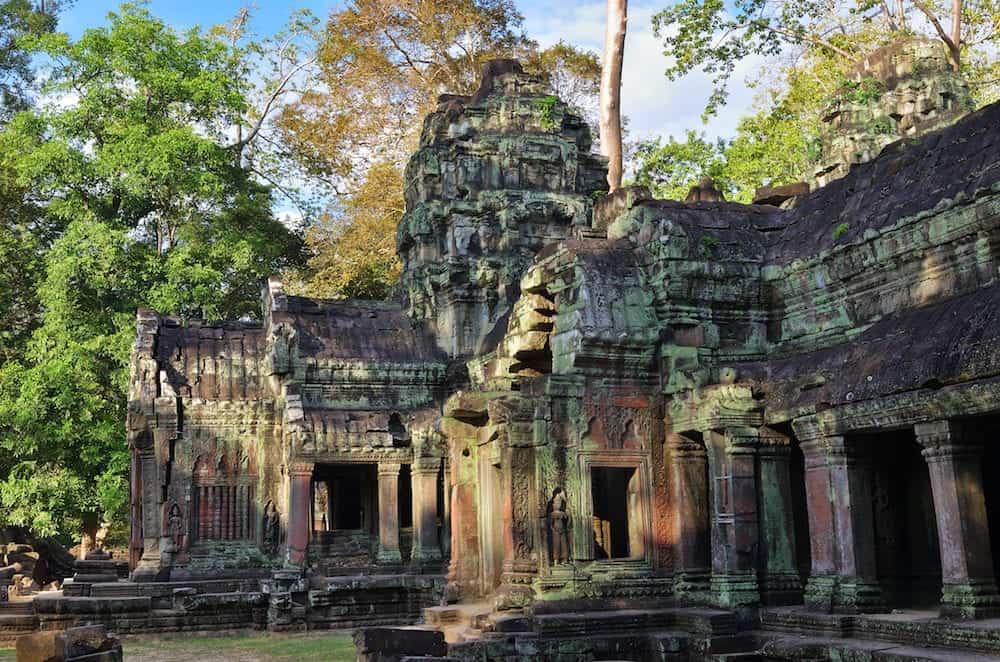 Bayon is known as the “faces” temple as the walls and stupas here are adorned with hundreds of carved stone faces. The outer walls also feature an impressive bas-relief depicting stories of everyday life in the 12th century. 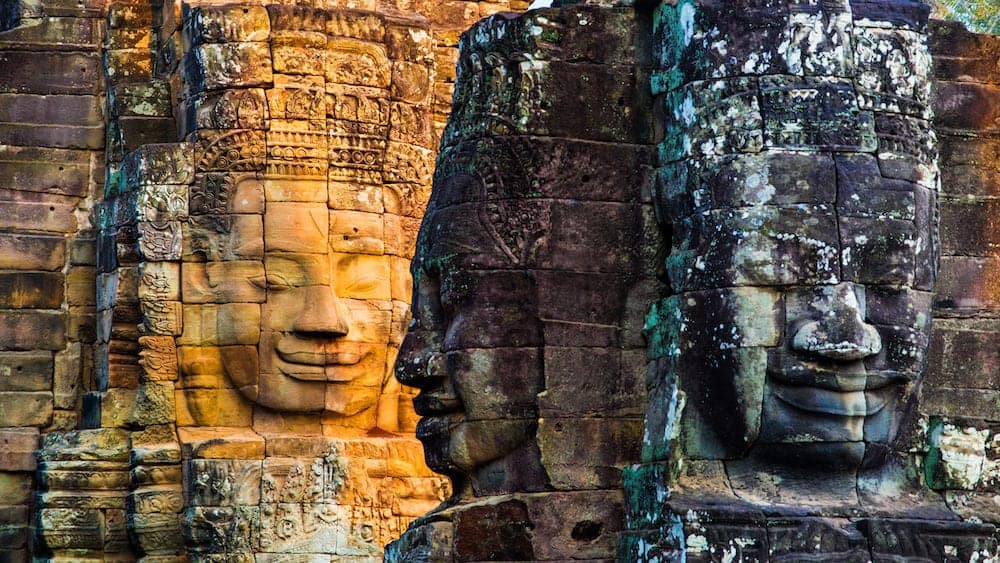 This archaeological museum opened in 2007 in Siem Reap and houses Angkorian artifacts from the Khmer Empire’s period from the 9th to the 14th century. There are eight individual galleries that walk visitors through the various phases of the Khmer Empire, as well as exhibits about cultural dress and rituals as well as spiritual beliefs. 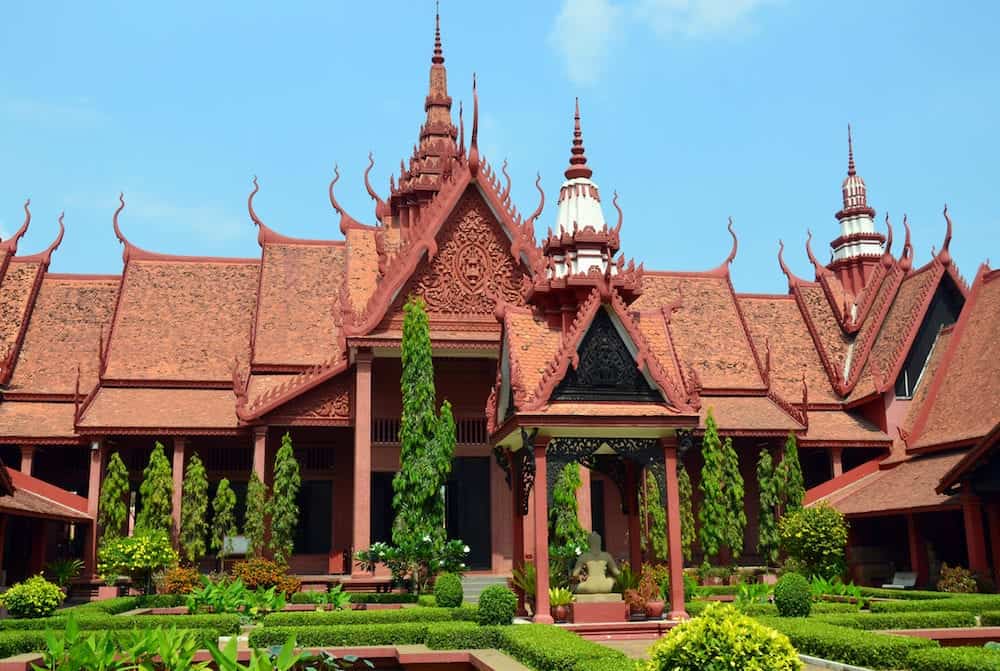 Inside the Angkor National Park complex is the Cambodian Landmine Museum, which aims to educate visitors on the importance of removing landmines from the ground of Cambodia. It is estimated that as many as five million landmines still remain today.

The museum has humble beginnings from the home of one individual who personally cleared landmines and kept a collection of defused bombs. In 2007, the museum moved from his home to it’s location today at the Angkor National Park. There are four galleries within the museum and it also helps to support amputees and their families. 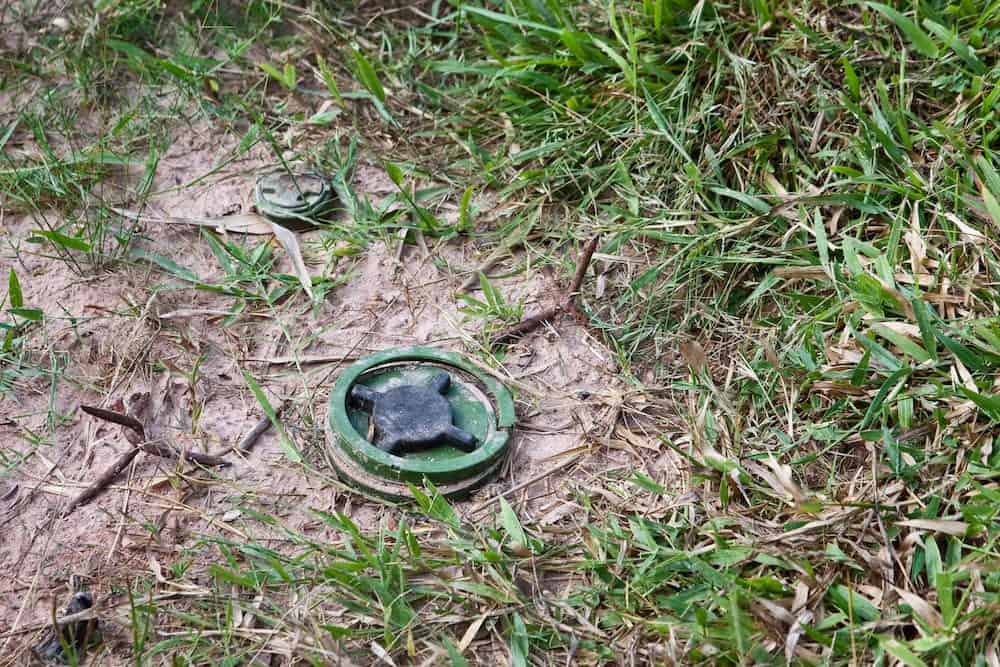 Tonle Sap Lake is the largest freshwater lake in Southeast Asia and is located about 15km south of Siem Reap. Tourists mostly come to Tonle Sap Lake to see the floating villages and their residents. In the dry season, the lake level drops quite a bit, and then grows five times the size during the rainy season. This is a great place to see wildlife and there are bird sanctuaries you can visit as well. 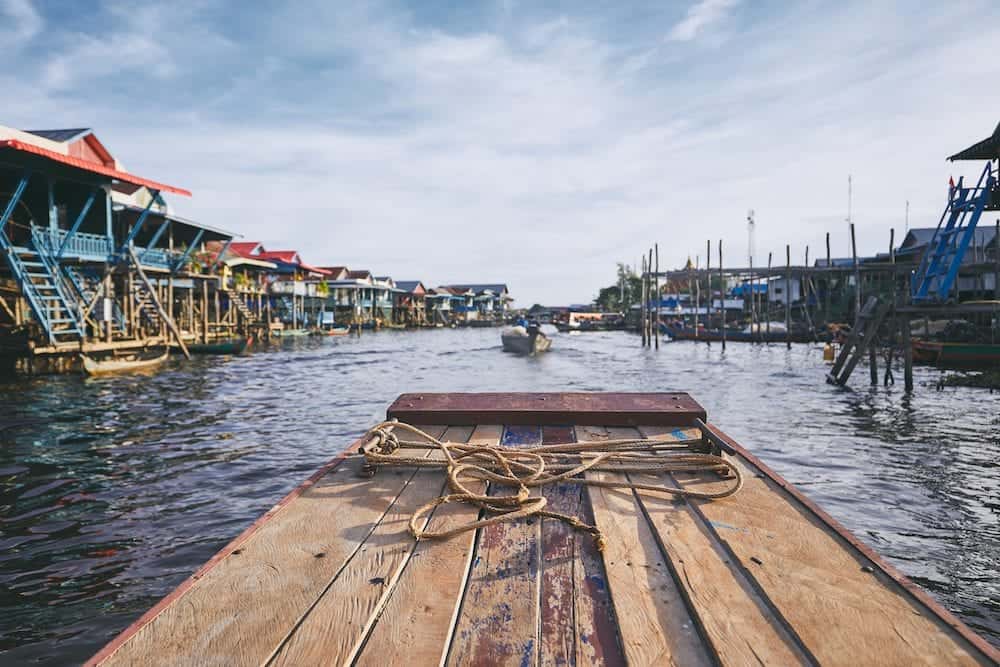 The very popular Elephant Nature Park of Chiang Mai, Thailand has a location in Cambodia, about 100 km north of Siem Reap. This organization works to rescue elephants from the logging and tourism industries and let them live out a life of leisure at the sanctuary. At the Siem Reap location, volunteers can stay from one week to eight weeks and help with the feeding and care of the elephants and other rescue animals that have made their way to the rescue. 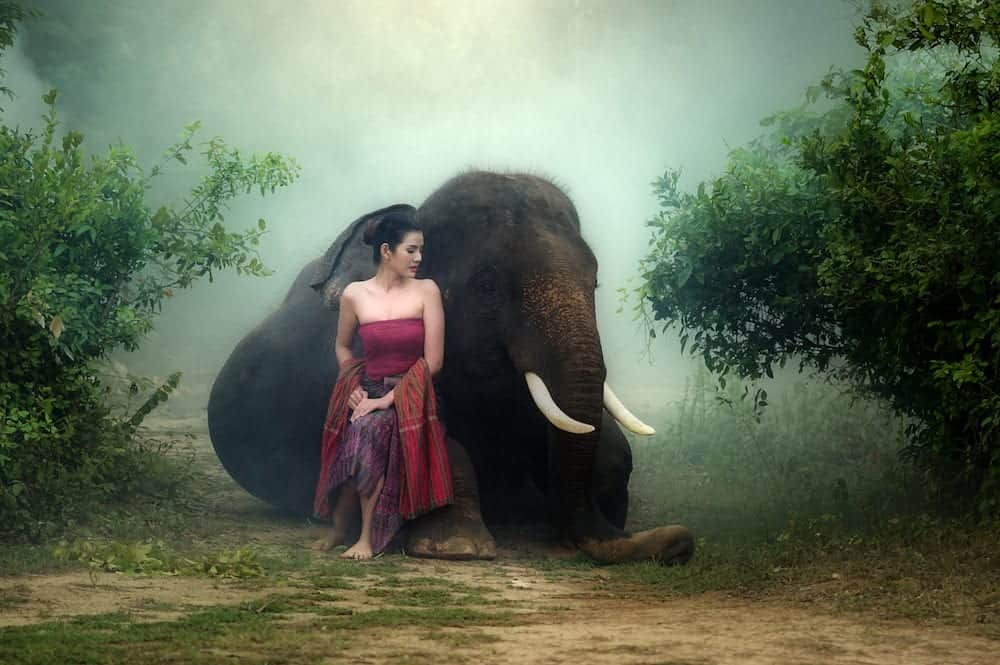 Phnom Penh is the capital city of Cambodia, with over 2 million residents living at the confluence of the Tonle Sap and Mekong Rivers. Here you can still see French influence in the colonial mansions lining leafy boulevards. The riverfront promenade is full of parks, restaurants, bars and several tourist attractions. 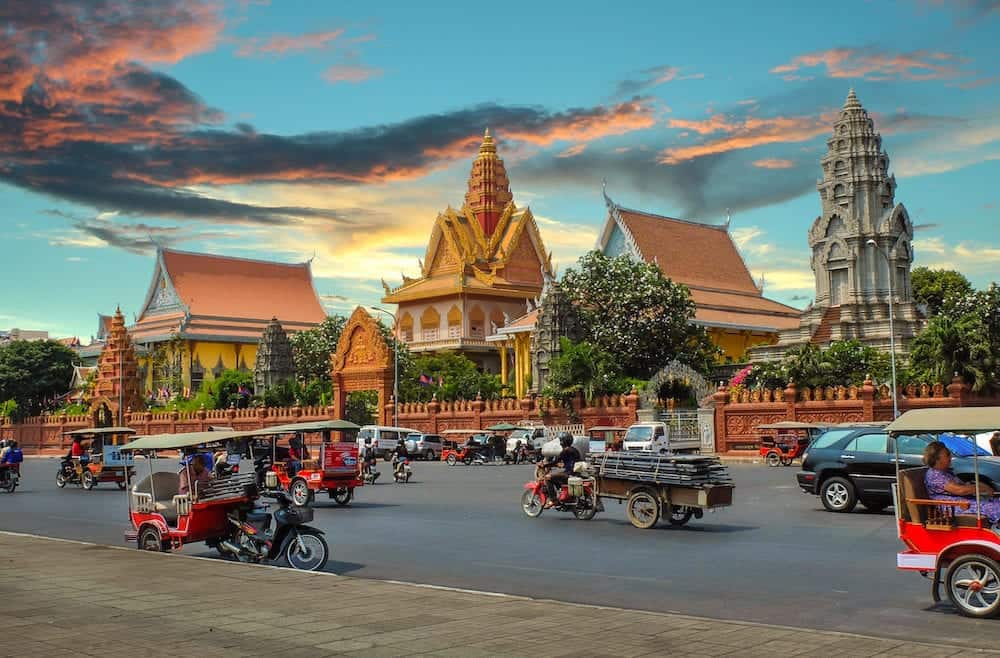 The Royal Palace is the residence of the King of Cambodia. Visitors can tour the palace, and guides are available to hire at the gate. Within the Royal Complex, next to the Palace is the Silver Pagoda, named for the silver floor tiles within the temple. This temple is where the King meets with monks and hosts Royal ceremonies. 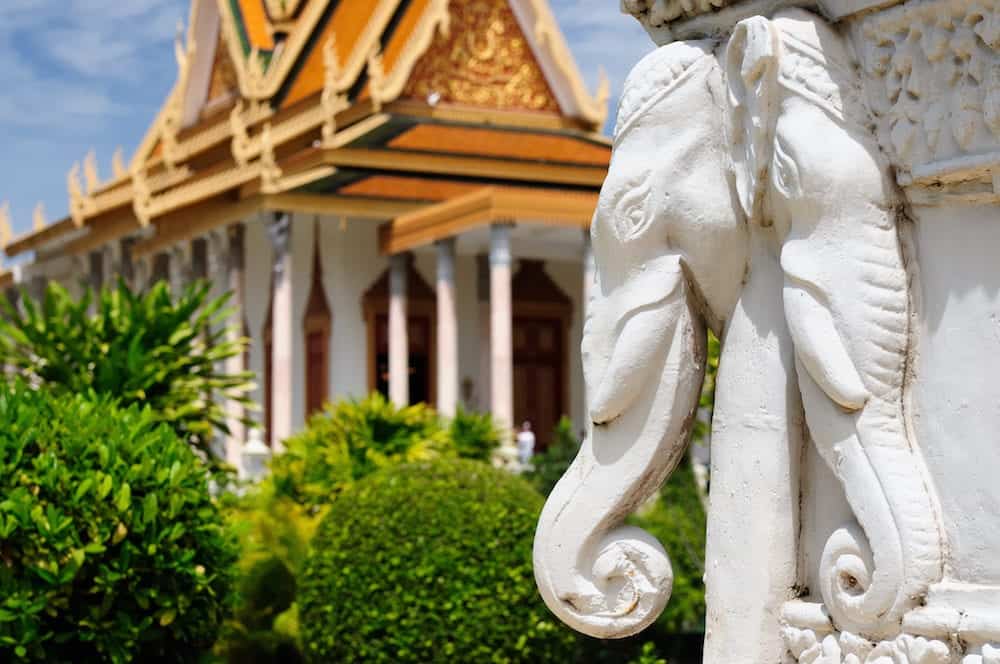 While in Phnom Penh, you can join a river cruise on the Mekong River. There are sunset and dinner cruises as well as multi-day cruises that continue on to Vietnam from Cambodia. The Mekong River is also where you can spot the endangered Irawaddy River Dolphins, a freshwater dolphin species that lives between Cambodia and Laos in the Mekong. You can easily hire a boat or kayak to take you to see the dolphins. 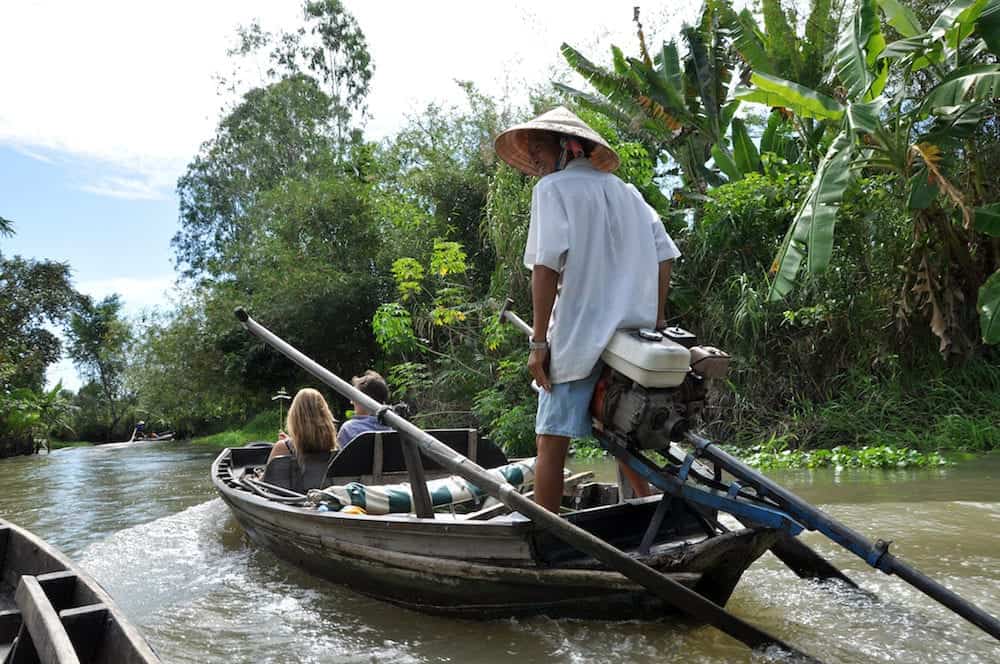 The Central Market is in the center of Phnom Penh and is the destination for shopping in the capital city. Built in 1937 in the Art Deco style, it is a landmark in the city and varies typical Cambodian architecture. Inside, you’ll find four wings of various shop stalls, selling jewelry, electronics, clothing and food as well as insects!

Check out this guide on eating insects in Cambodia. This cultural experience is not to be missed on your visit to Phnom Penh. 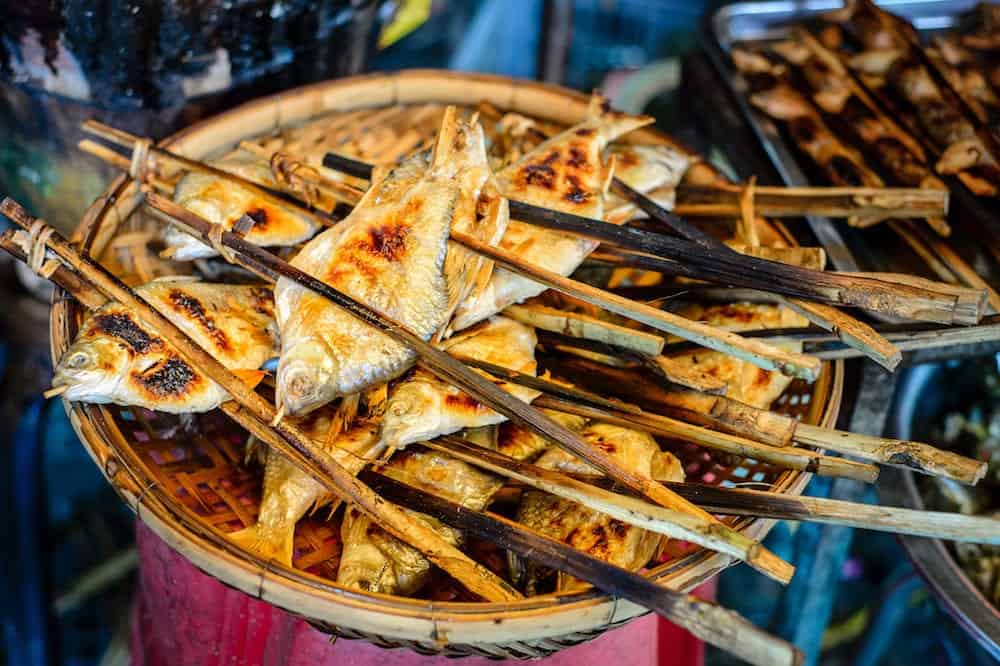 The Phnom Penh museum chronicles the Cambodian genocide of the 1970’s. The museum is housed in a former high school which was used by the Khmer Rouge as a security prison and execution center. The museum opened only a year after the Khmer Rouge was driven out of Cambodia in 1979. This somber reminder is an important part of understanding Cambodian history and culture.

Better known as the Killing Fields, this is another important reminder of the Khmer Rouge genocide that ended the lives of more than 1 million Cambodians in just four years. At this site, nearly 8,000 bodies were found and today the victims are memorialized by a Buddhist stupa containing more than 5,000 skulls from the victims. 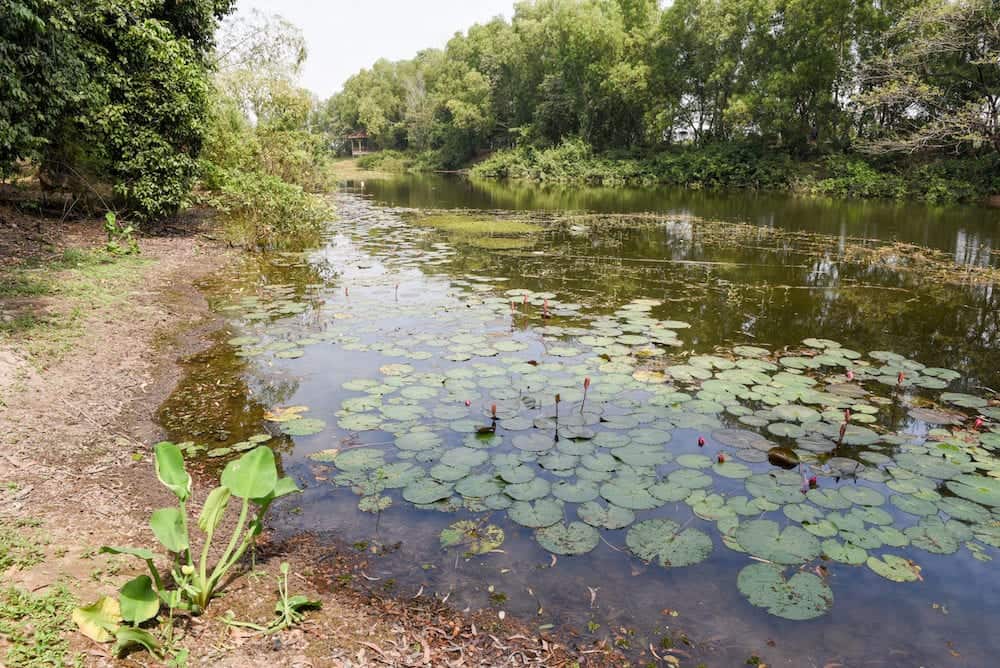 Sihanoukville is the main coastal city of Cambodia and the destination for a Cambodian beach vacation. The town was only recently founded in the 1960’s and after massive destruction during the Khmer Rouge regime of the 1970’s, it has only recently begun to rebuild and attract tourists. The city is surrounded by beaches, and makes a low-key alternative to island-hopping around Thailand. 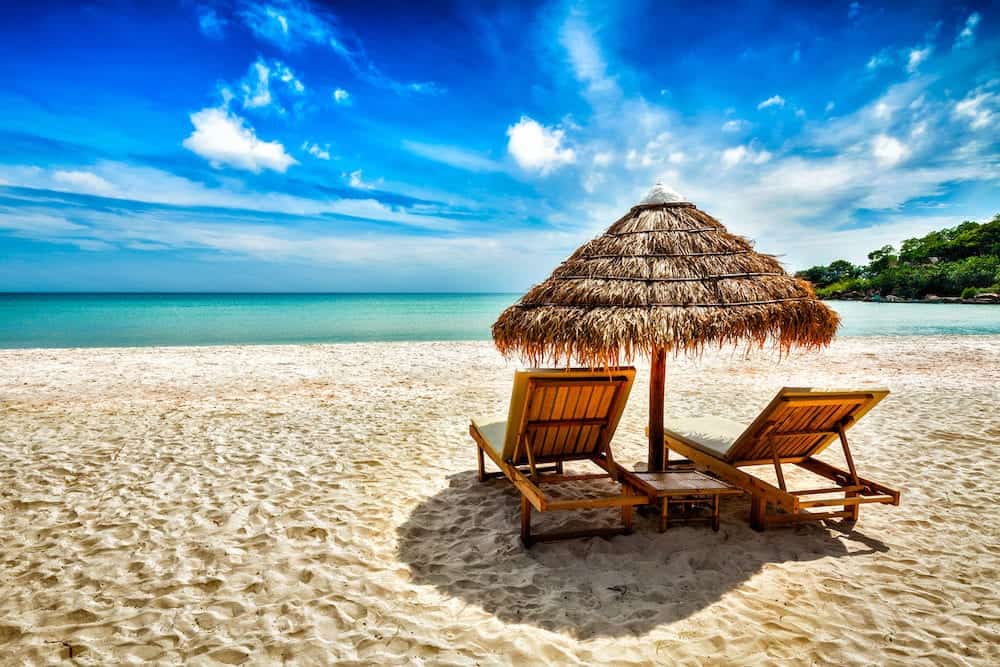 Just a couple of hours inland from Sihanoukville is Preah Monivong National Park, at the southern edge of the Elephant Mountains. Also known as Bokor National Park, it has nearly 1,000 acres of rain forests and protects several endangered species such as Asian elephants, Asiatic black bears, and Indochine tigers. 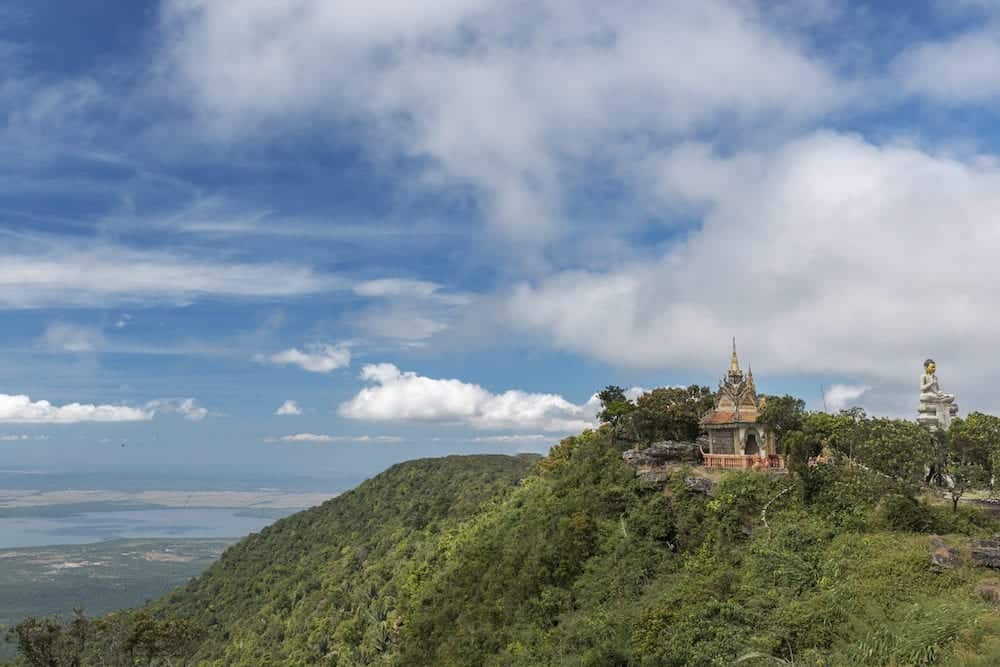 An interesting cultural experience in Cambodia is to see an Apsara Dance. If you visit the temples of Angkor, you will see Apsara carved in some of the stone. This traditional cultural dance is an ancient form of entertainment known for elaborate costumes and jewelry as well as elegant dance moves. Visitors to Cambodia will find Apsara shows frequently advertised throughout the tourist towns. 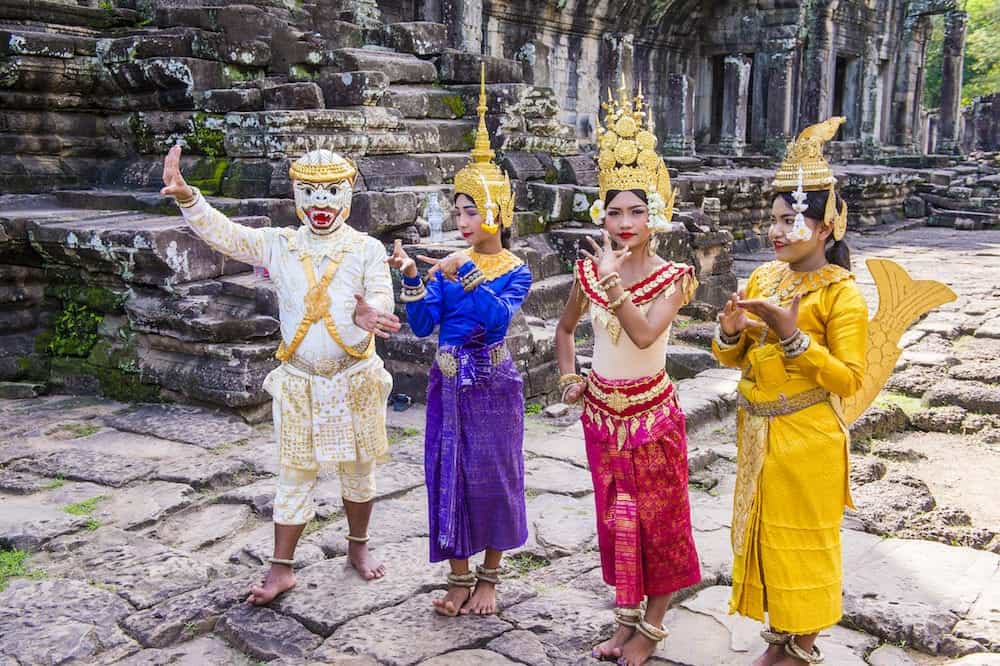 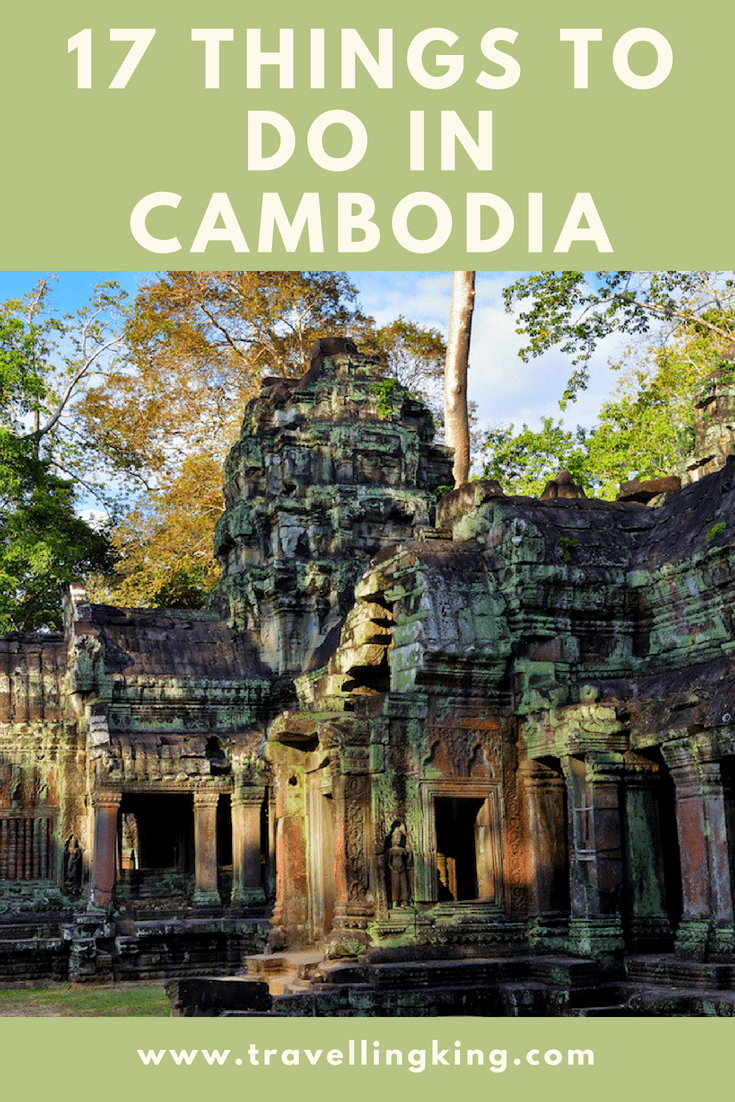 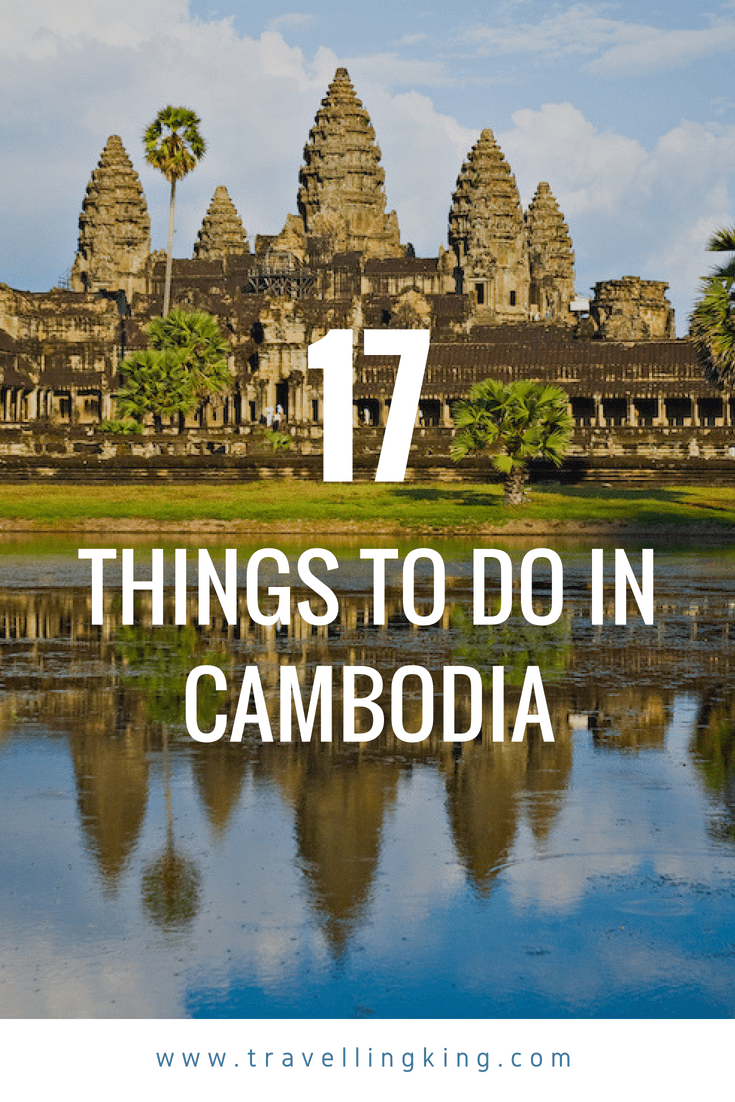 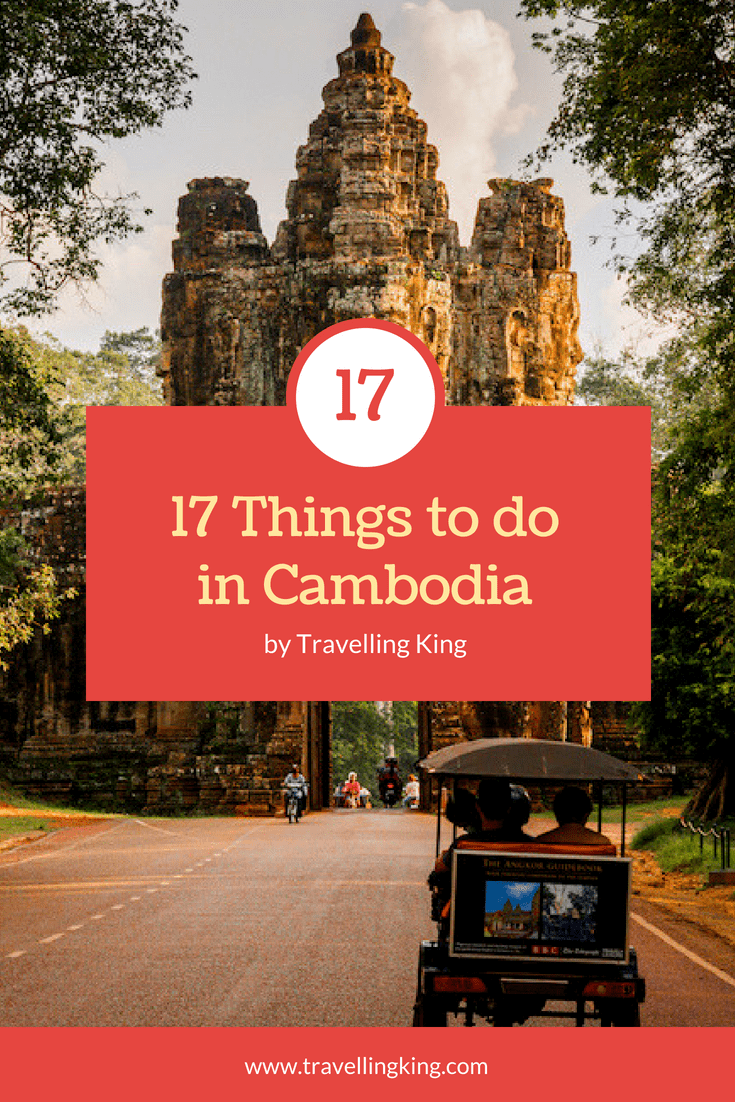 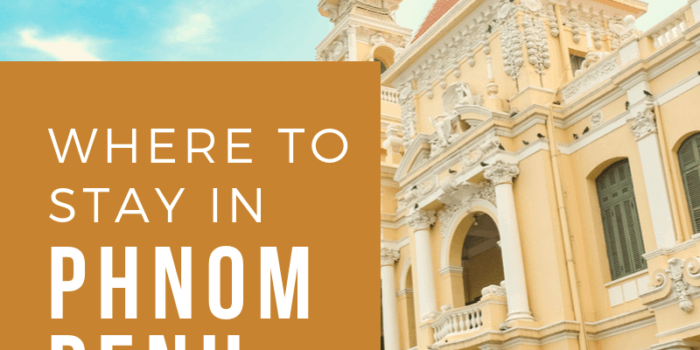 Where to stay in Phnom Penh 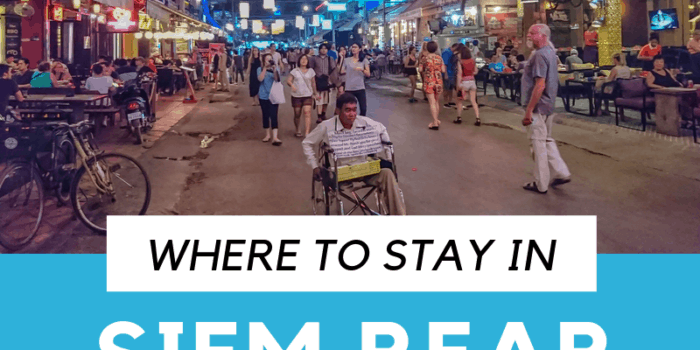 Where to stay in Siem Reap

The Best Diving Spots in Cambodia 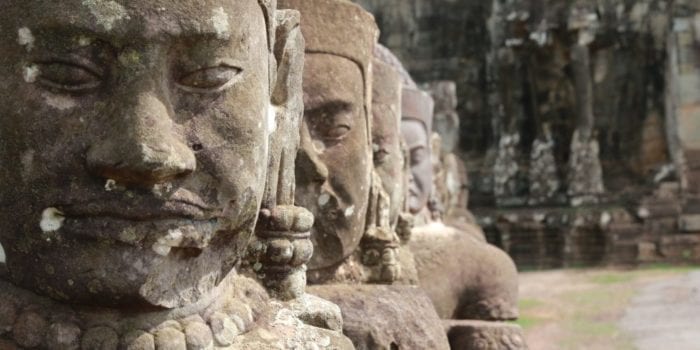