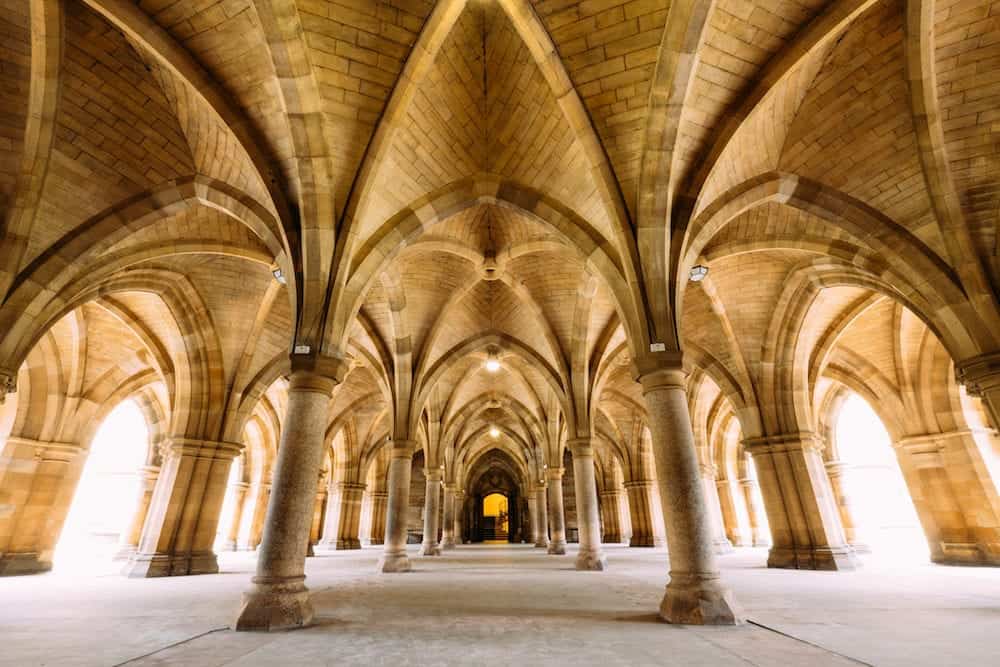 Glasgow is a port city that is often considered a cultural hub of Scotland, thanks to shipbuilding prosperity and being home to the Scottish Opera, the Scottish Ballet and the National Theater of Scotland. Glasgow has many quality museums, and a thriving music scene. Although it is not the capital, it is the largest city in Scotland, and the third largest city in the United Kingdom.

Need data for your trip to Scotland? We use Tep Wireless which offers unlimited data for $8 per day. Travelling King readers can get 10% off using the discount code TRAVELLINGKING on check out.

Check out Rabbie’s small group tours of the UK and Ireland – I have used them several times and LOVE the drivers and tours (no, they aren’t paying me to say this haha!)!

The main square of Glasgow is George Square and named after King George III. The square dates back to 1871, and is surrounded by several historic buildings from 19th century. There is also a large assortment of statues and monuments.

As with many European town squares, George Square has been the site of many public meetings, protests and political gatherings over the centuries, including the 1919 Black Friday protest, with nearly 100,000 protesters campaigned for improved working conditions. More recently, the square received a makeover in anticipation of the 2014 Commonwealth Games, and the landscaped areas are a great place to relax and people watch. 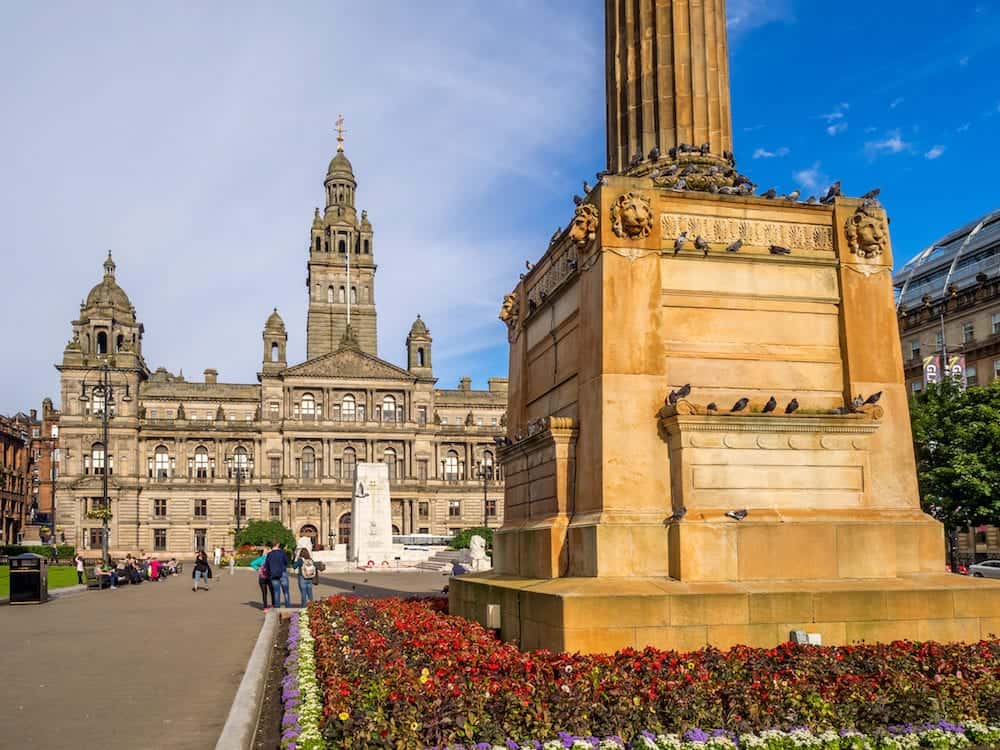 This 12th century medieval cathedral is the only Scottish mainland cathedral to survive the Reformation of 1560. The cathedral still has an active Christian congregation, but is also open to the public each day. You can admire the stone carvings and large collection of stained glass windows. The lush gardens surrounding the cathedral are worth a stroll, as well. Hours vary based on service schedule, so check ahead before visiting. 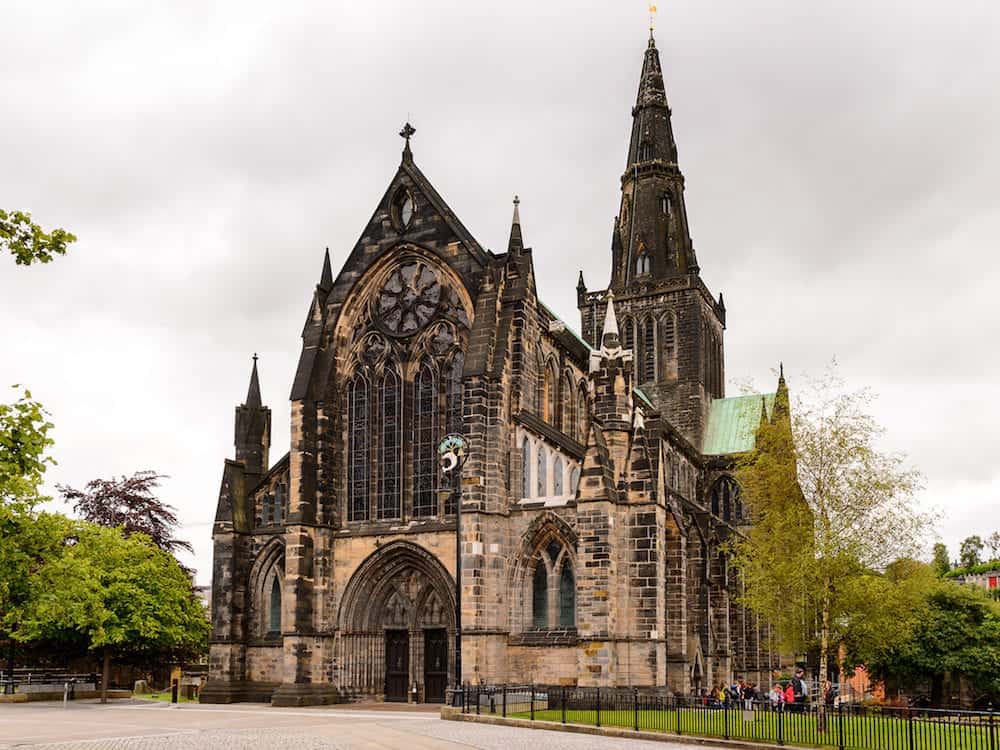 Adjacent to the Glasgow Cathedral is the Necropolis, a Victorian cemetery where over 50,000 people have been buried since 1832. The burial ground sits on a small hill with nice views of the cathedral, and spreads across 37 acres. The cemetery is a mixture of regular grave markers, memorials, mausoleums and statues. 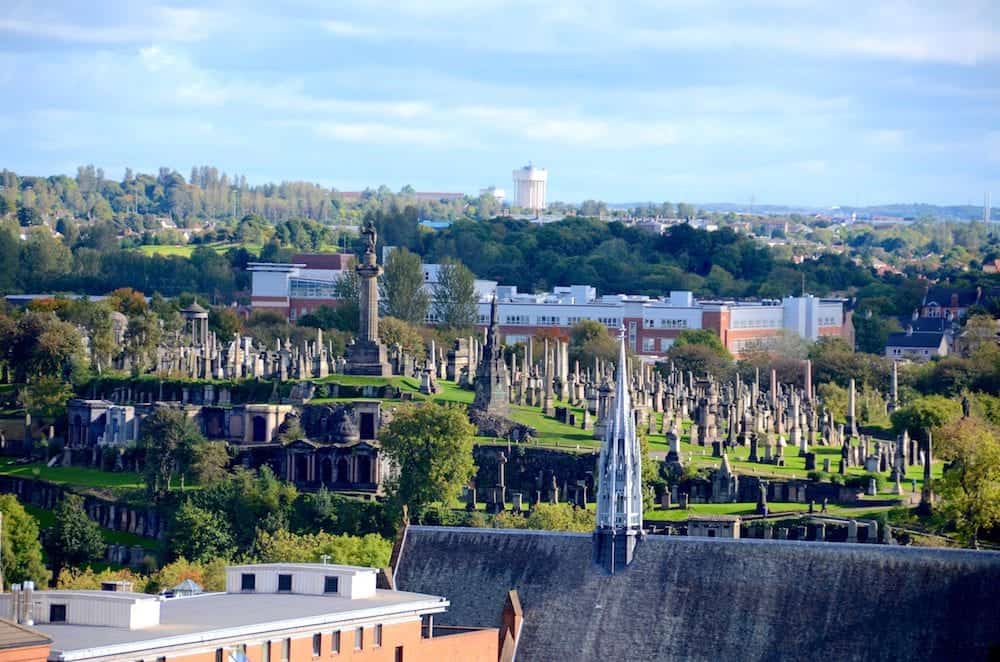 Glasgow’s Riverside Museum celebrates the transportation history of Glasgow, with over 3,000 transportation modes on display, from skateboards to trains. The museum receives over 1 million visitors per year, making it the 5th most popular thing to do in Scotland.

The very modern building, finished in 2011, sits on a former shipyard on the bank of the River Clyde. The museum is highly interactive, with over 90 touch-screen panels telling the stories behind the transportation items on display. The museum is free to enter and is open daily. 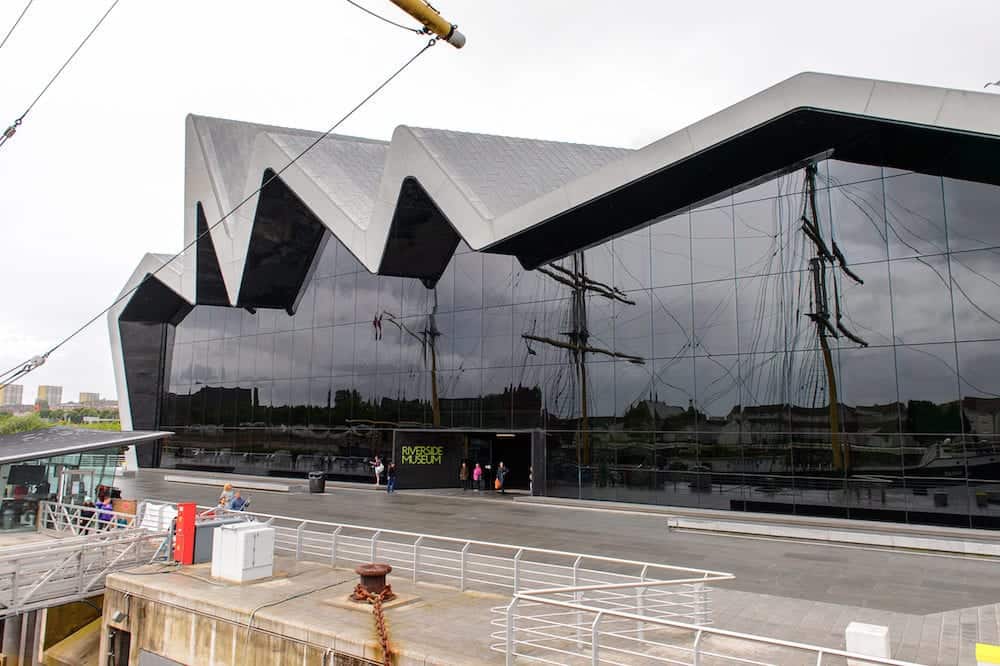 This is Glasgow’s largest park and the only county park within the city of Glasgow. Covering 360 acres, Pollok Country was named the Best Park in Europe in 2008. Originally part of a grand family estate, it was donated as public land in 1966.

You can visit the Pollok House museum, cafe and gift shop, enjoy a stroll or bicycle ride along many paths through the park or visit one of several playgrounds in the area. Pollok Country Park is a great place to get some fresh air and relative quiet when visiting Glasgow. 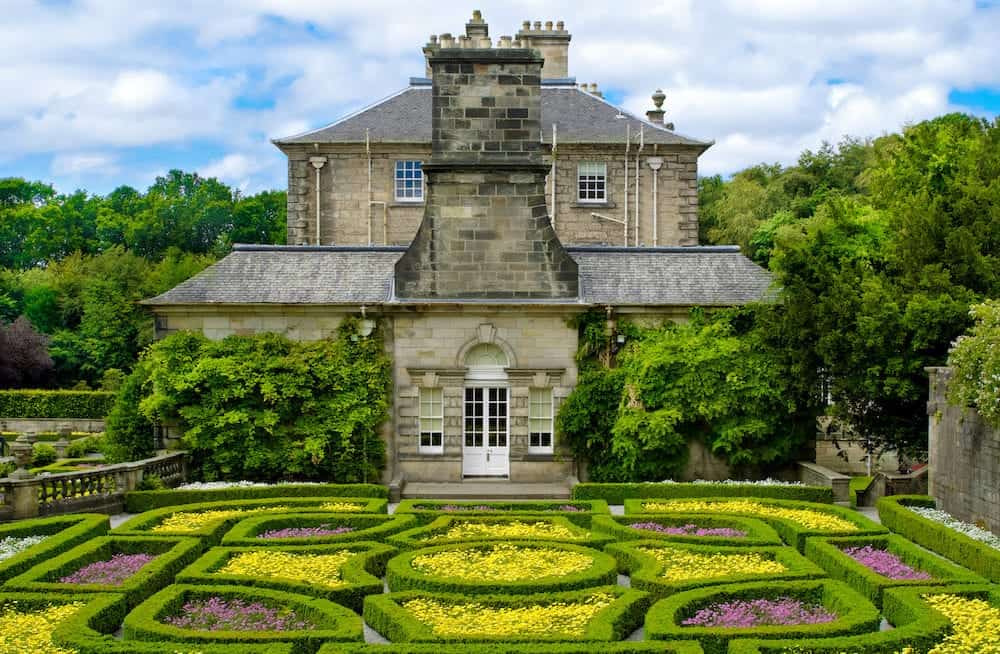 Another popular Glasgow park is Kelvingrove Park, along the banks of the River Kelvin. A bit smaller than Pollok Park, at just 85 acres, Kelvingrove Park hosts many events and festivals throughout the year. This is also where you’ll find the Kelvingrove Art Gallery and Museum, a collection of 22 themed art galleries containing over 8000 objects of art, all on display to the public with no entrance fee! 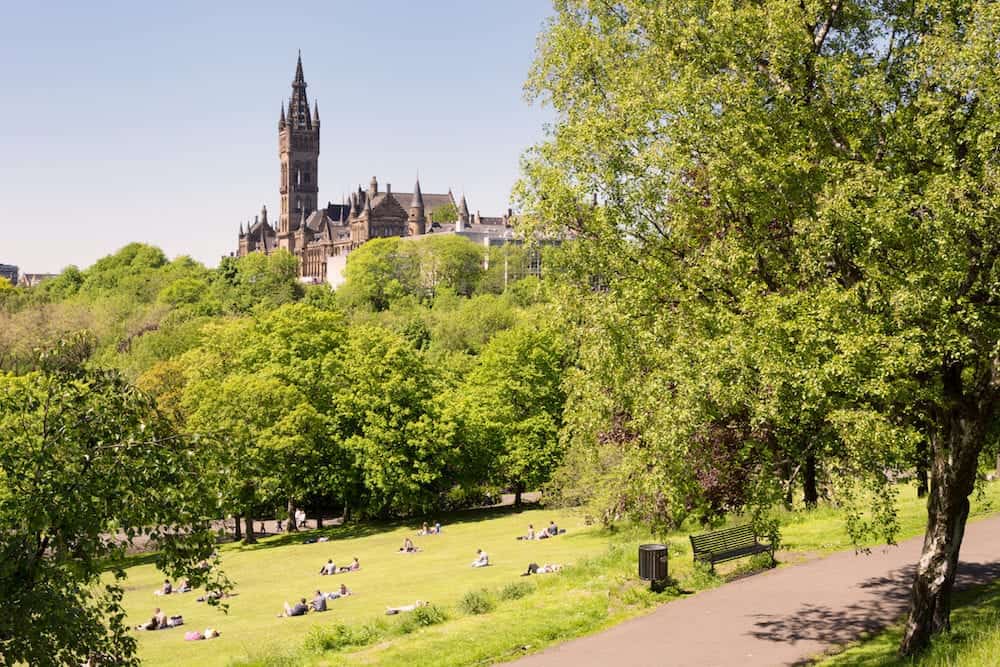 Buchanan Street is Glasgow’s main shopping street, featuring many upmarket shops along the street as well as within the Buchanan Galleries. The street itself is closed to vehicles, making it a nice place for a stroll and some window shopping.

The street is where you’ll find many flagship stores, such as H&M, Levi’s, Apple, All Saints and Nike. There are also many international hotel brands in this area, as it is a popular place to stay with so much shopping, dining and entertainment. 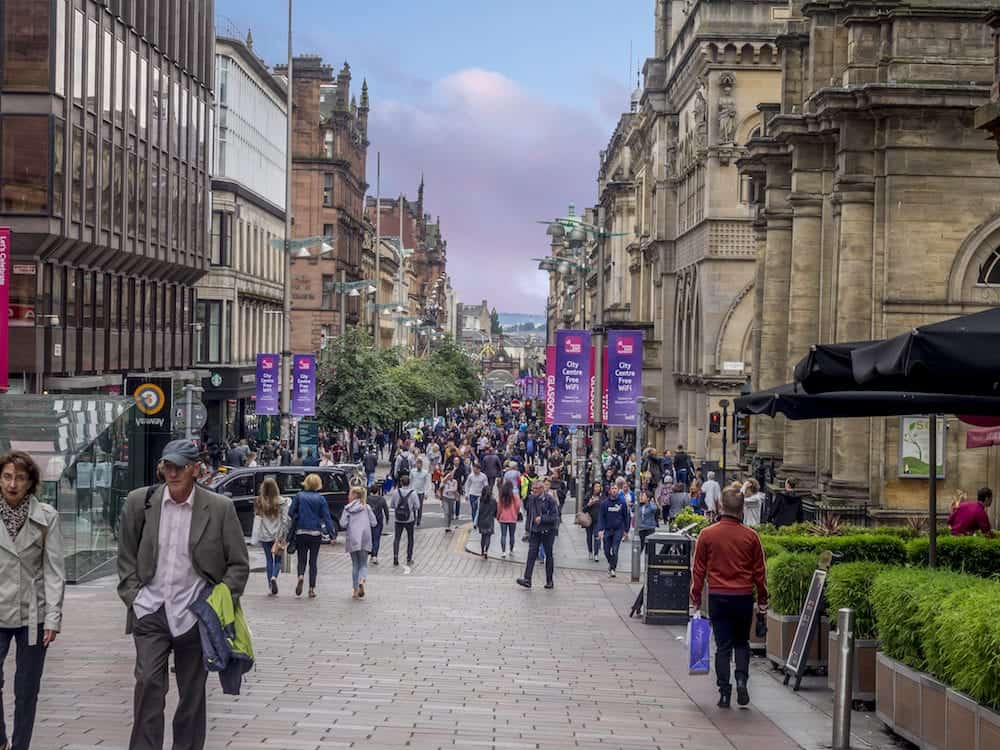 For a fancy tea experience, a must in the UK, visit the Willow Tea Rooms, recently relocated to the Watts Brothers store. If afternoon tea isn’t your style, you can also enjoy morning coffee, breakfast or lunch at the tea room. Don’t miss the cake cabinet, full of sweet delicacies like meringue, tarts and cheesecakes. 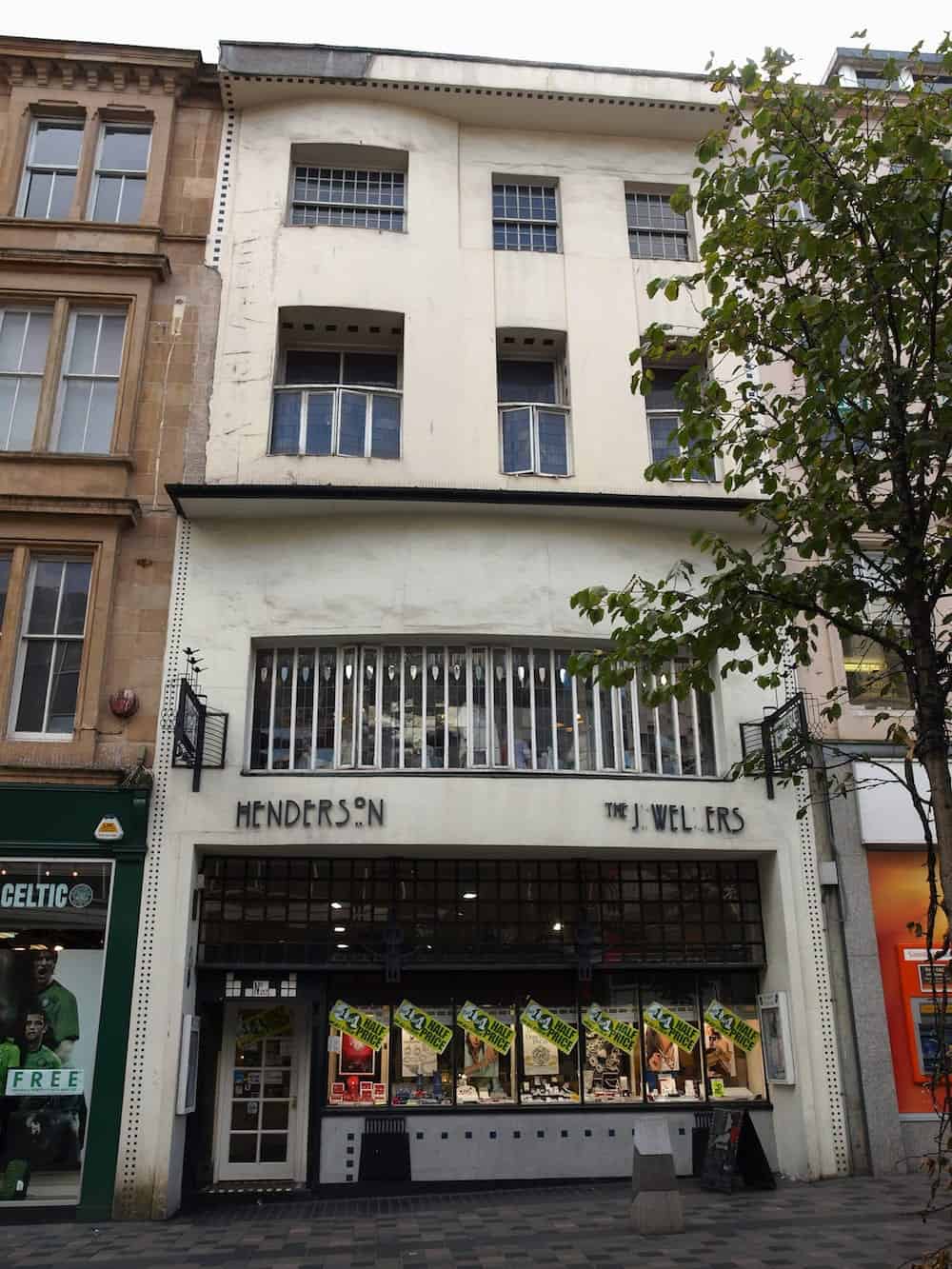 As you might guess from the name, this Glasgow attraction is all about science. With over 300 interactive science exhibits, you could easily spend the better part of a whole day here. Hands-On exhibits are heavily emphasized here, with a robust workshop schedule for all ages.

Some workshop topics include computer coding and robotics. Your admission ticket includes workshops and shows, while the Planetarium is an additional ticket. There is also an IMAX theater on-site, as well as a cafe and a gift shop. The museum is open daily. 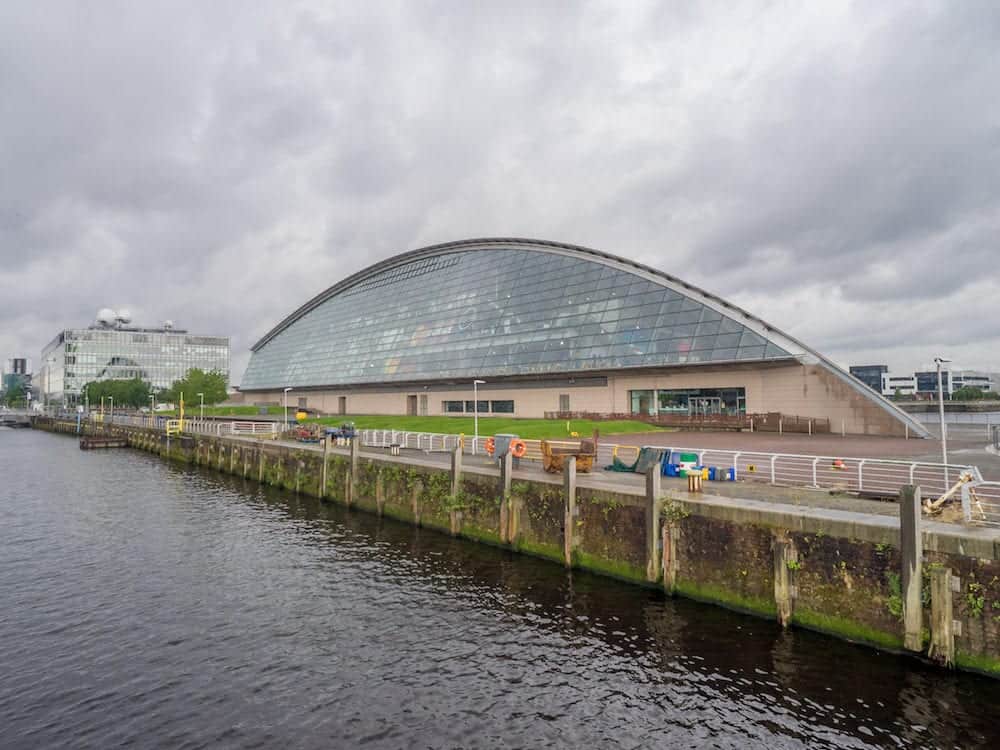 The botanical gardens of Glasgow are renowned for several glasshouses, the most famous of which is Kibble Palace, which underwent extensive renovations in 2006 and is one of the largest glasshouses in England. The botanic gardens were initially established in 1817 to supply the University of Glasgow. Admission is free, allowing you to explore 12 glasshouses plus manicured grounds year-round. 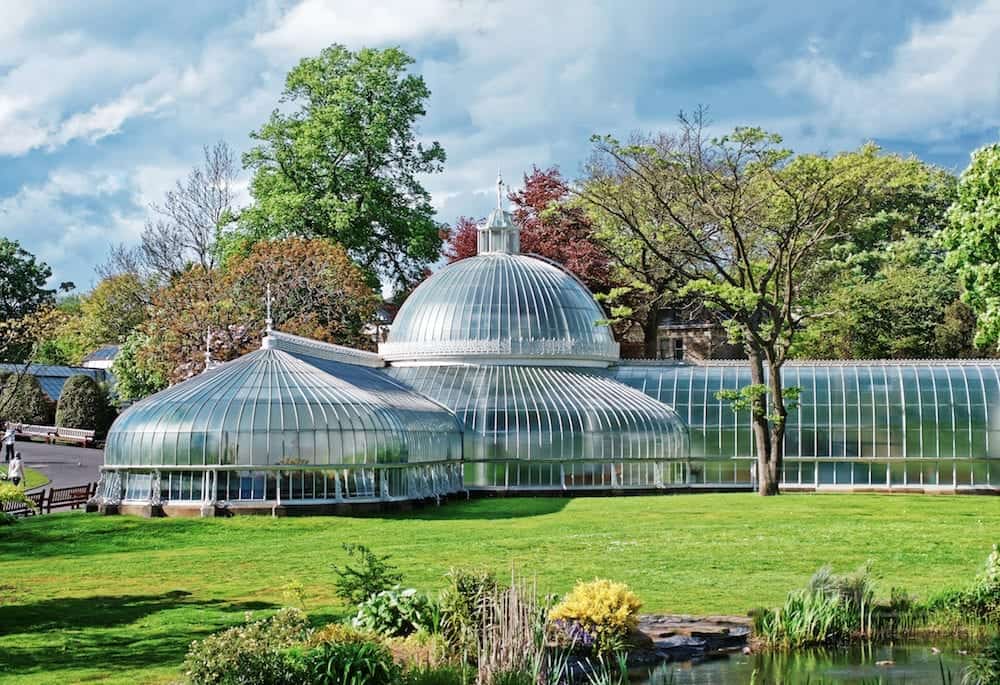 Technically, never a true palace, the People’s Palace was erected in 1898 to provide a cultural center for the people of Glasgow in the East End, which at the time was dirty and overcrowded. While it originally contained reading and recreation rooms, today it is a museum of social history, telling the story of the people of Glasgow from 1750 to today.

The Winter Gardens are a conservatory attached to the People’s Palace filled with exotic plants and a small cafe. The entire complex sits in Glasgow Green, Glasgow’s oldest public outdoor space. 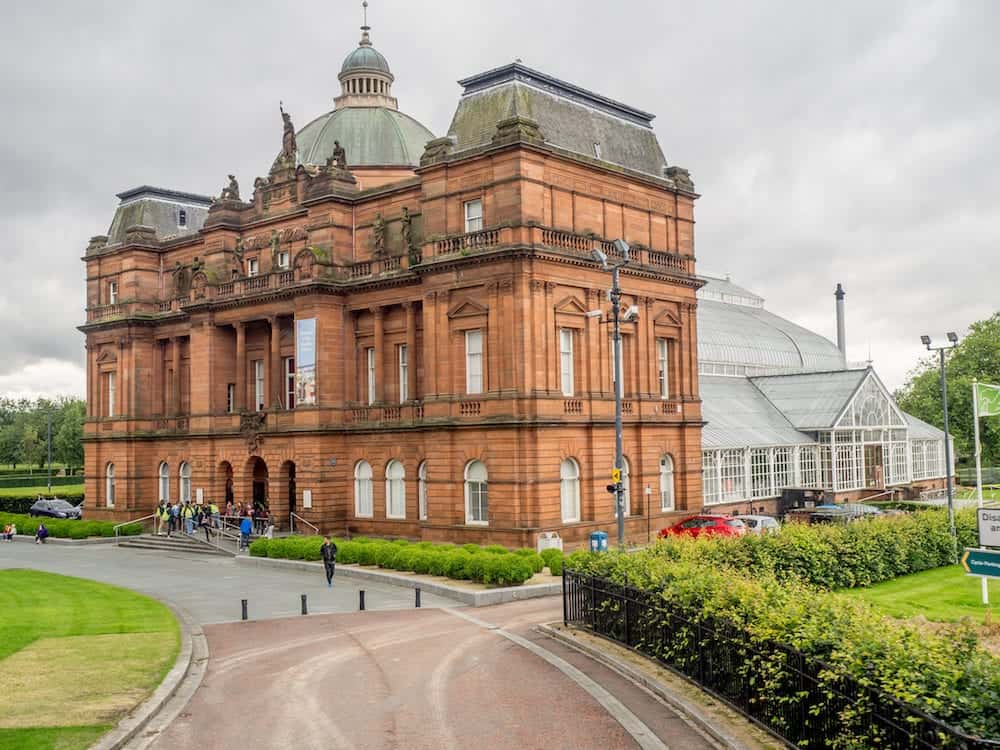 The oldest museum in Scotland is a unique collection of oddities founded by doctor and collector John Hunter, who amassed this collection throughout the 18th century. The collection is now part of the University of Glasgow, and encompasses the Hunterian Museum, the Hunterian Art Gallery, the Mackintosh House, Zoology Museum and the Anatomy Museum. The Hunterian Museum collection includes everything from fossils to scientific instruments. The museum is closed on Mondays, and admission is free.

This whisky distillery has been in operation since 1833, producing Highland single malt whisky for nearly 200 years. Set about 40 minutes from Glasgow, the Glengoyne Distillery is a beautiful country setting. Several tours are available, from a basic 45 minute tour to the 5 hour Masterclass in which you taste five whiskies and sherries and create your own single malt. There are also overnight accommodations in the village of Glengoyne if you’d like to make a night of it.

In the East End of Glasgow is where you’ll find the Barras Market, originally named for the “barrows” used to sell goods in the 1930’s when the market was started. Today, the Barras resembles a street festival, with several indoor covered markets, as well as stalls in the street. You can buy fresh fruits and vegetables, clothing, accessories, antiques and collectibles. 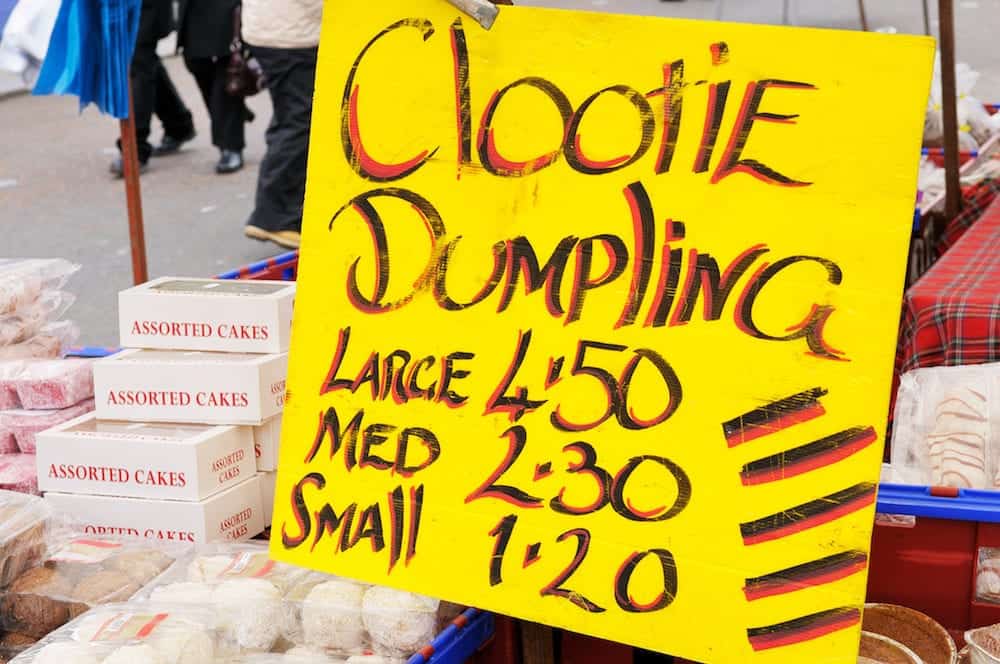 With a lively music scene in Glasgow, King Tut’s Wah-Wah Hut has been hosting live acts and experimental theater since 1990. This is allegedly where the band Oasis was discovered so you never know which future-famous band you might catch here. Food is served downstairs, and there are often really good drink specials, great for those traveling on a budget.

Glasgow’s West End neighborhood is an area you definitely want to include in your Glasgow itinerary. It’s easily accessed via public transportation, and once there, it’s very walkable. Comprised of several small neighborhoods, this area is full of historical attractions, tree-lined streets and parks, alongside excellent eating and drinking choices.

The West End is also where you’ll find the SSE Hydro Arena, Glasgow’s biggest live entertainment venue, with a calendar full of super-star performances from the likes of Demi Lovato, Katy Perry and Justin Timberlake. Within the West End, Finnieston has been rated the hippest place in the UK, thanks a plethora of trendy food and entertainment options. 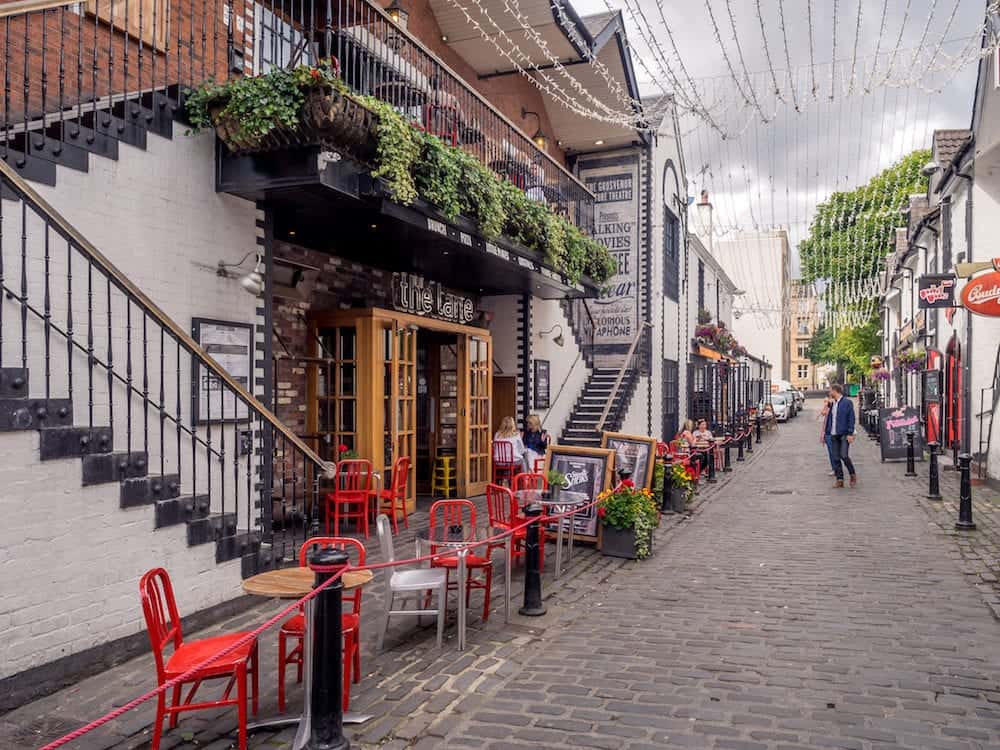 Less than an hour from Glasgow, Loch Lomond & The Trossachs National Park is an excellent day trip from the city. Of course, once you see the serenity of the Scottish lowlands, you will very likely want to make this an overnight visit. There are cruises you can take out on Loch Lomond or one of several other lochs in the park.

There is also camping, hiking, cycling, golf, fishing and so much more! If you don’t want to rent a car, it is possible to arrive and tour the park by bus and train, however to leisurely enjoy some of the most scenic spots and hikes, having your own car will be worthwhile. 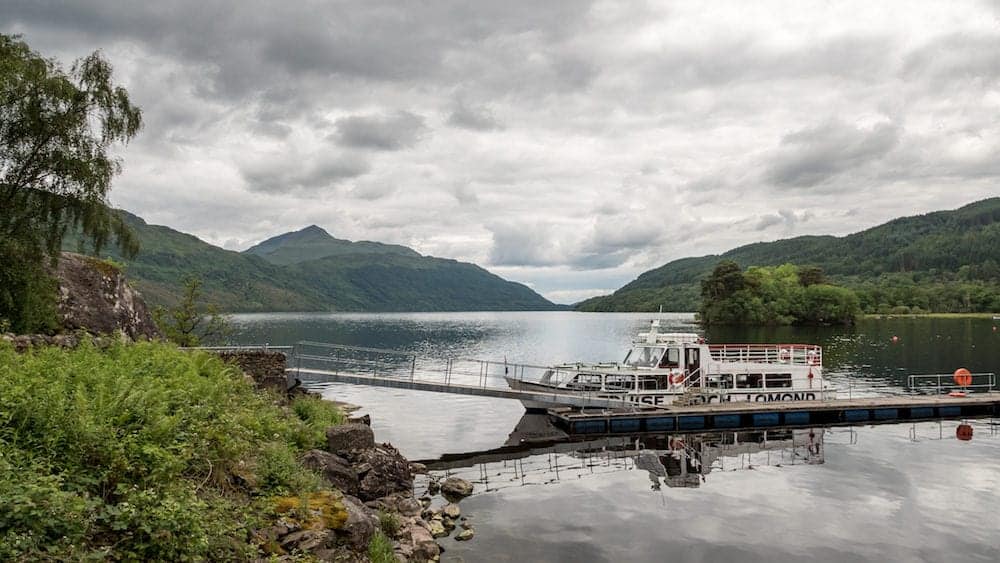 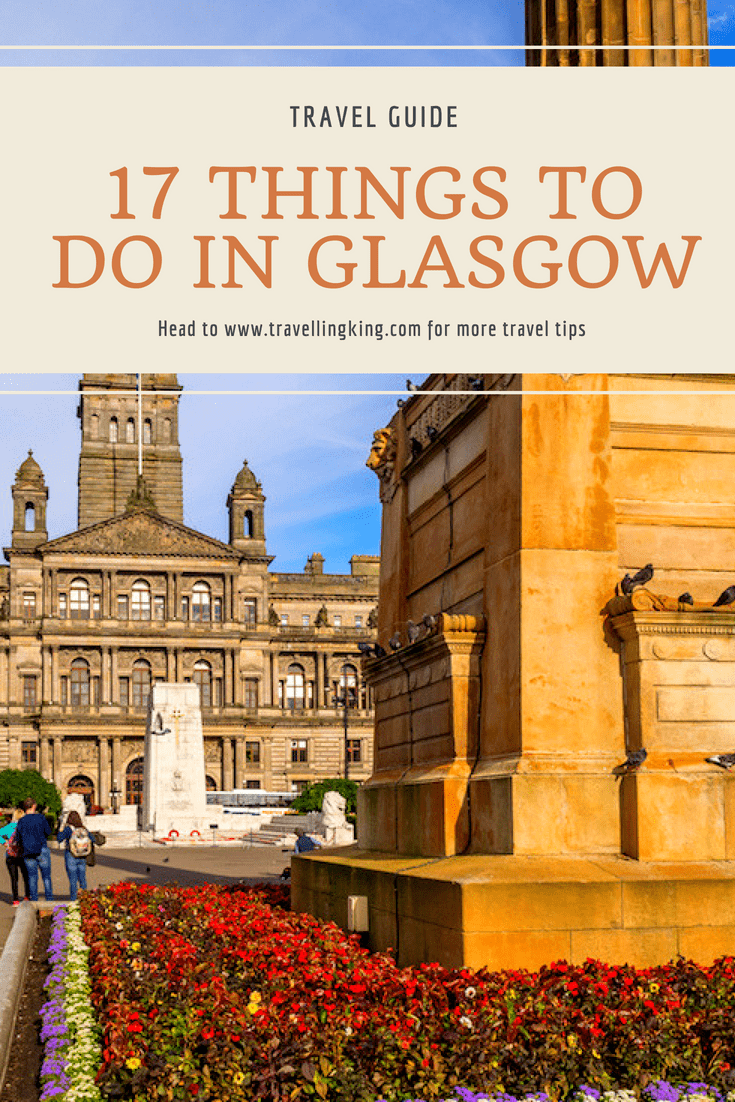 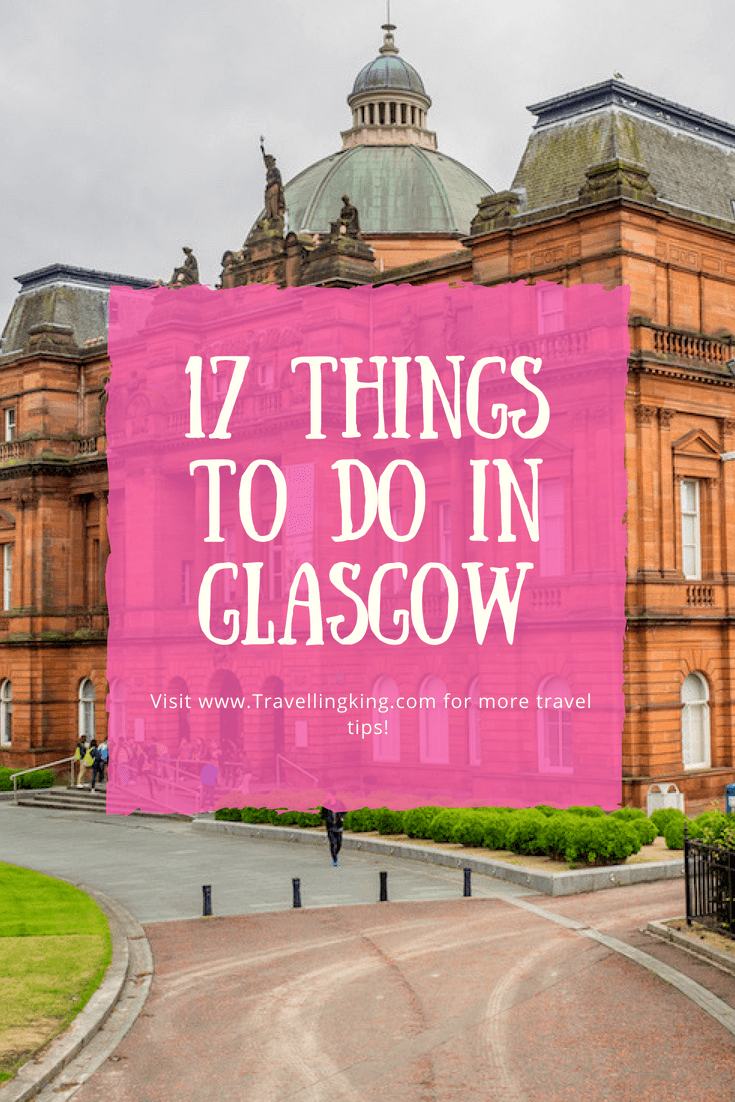 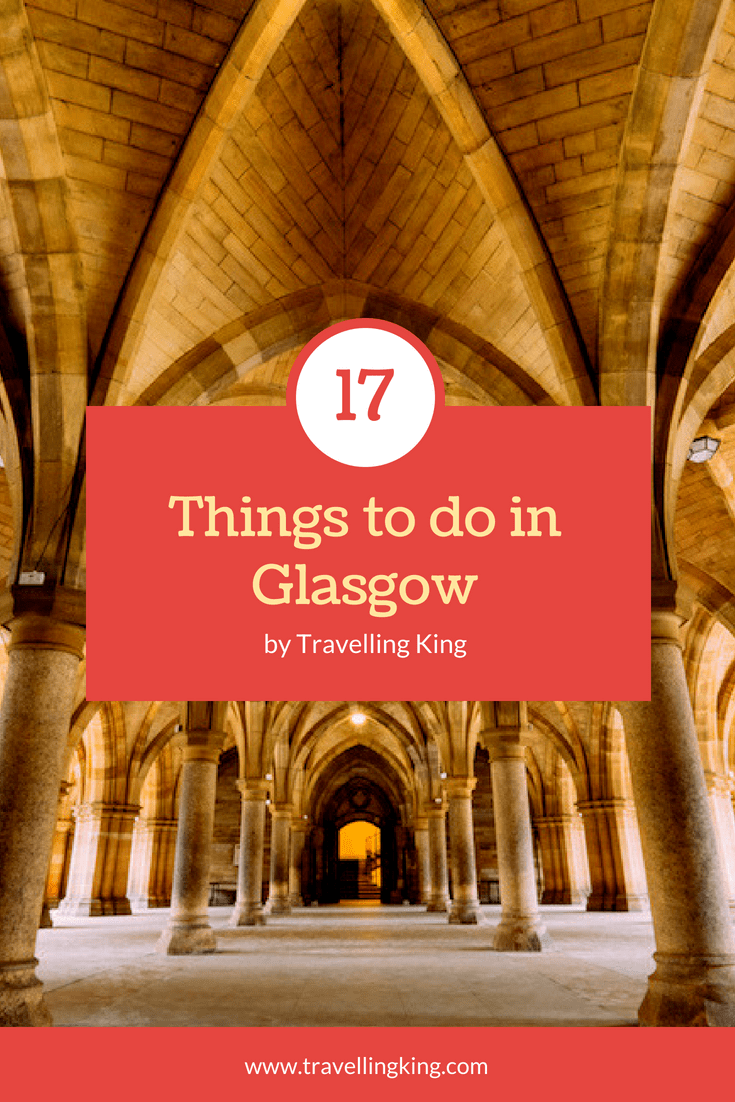 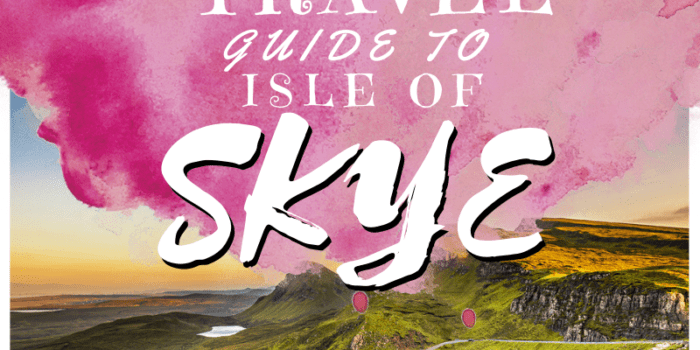 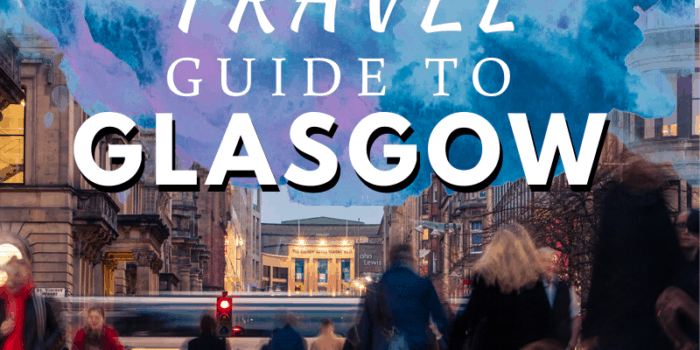 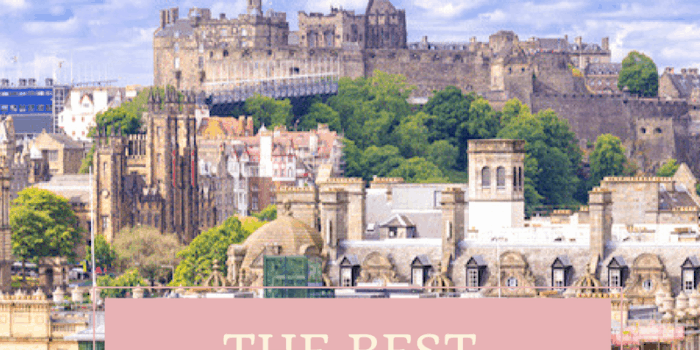 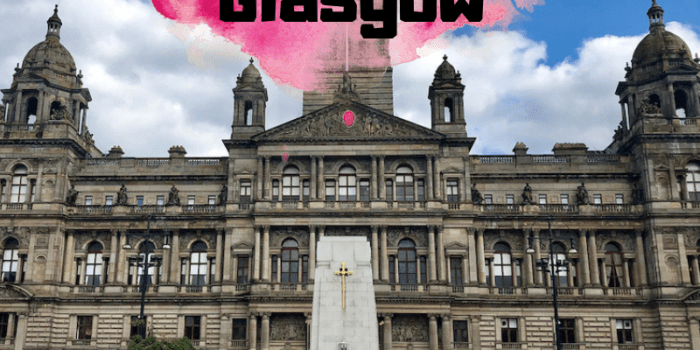 Where to stay in Glasgow 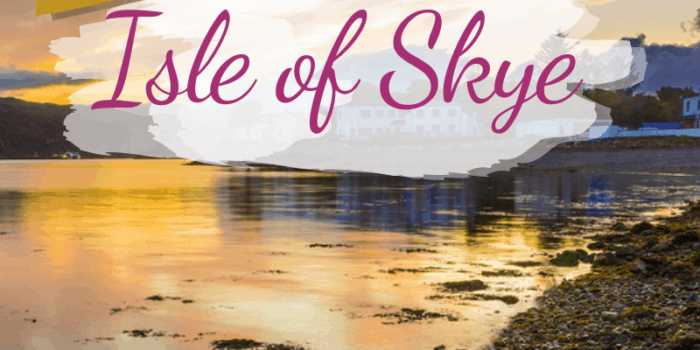 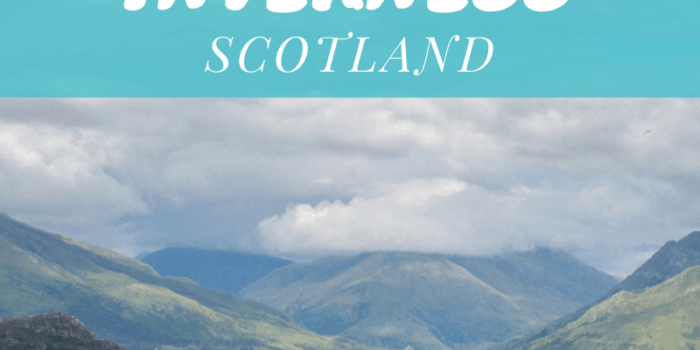